In honor of taking 13-year-old Jacob to see ZZ Top tonight – his first real concert (I’m not counting Taylor Swift), I present a one of my many interviews with Billy Gibbons. This is a shorter piece, done in 1996 for a 70s issue of Guitar World.

One of my favorite Billy stories… He was in New Y ork wiht a free afternoon adn wanted to visit us at Guitar World. He left a message for Editor Brad Tonlinski: “Hello Brad. It’s Billy Gibbons. I am in New York with some time to kill and would love to pay you a visit. Call me back at my hotel, but you’ll have to ask for me by my pseudonym: Billy F. Gibbons.”

We called him back and he came over for a great visit. I gave him my 5 Royales collection and he repaid me with a pair of dice from his pocket – sadly, they were not loaded, but still a great momento. See you tonight, Mr. G. 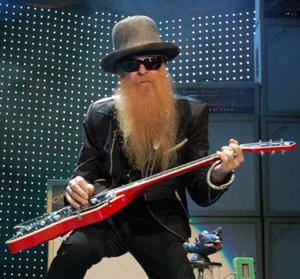 “Being a rock star in the Seventies was wall to wall craziness without any threat of penalty.” Billy Gibbons snickers into the phone, his laugh reverberating all the way from his Johannesburg, South Africa, hotel room. “It was all great fun. I remember walking into New York’s Gramercy Park Hotel and seeing a guy in crushed velvet hot pants, lace-up knee boots and a feather boa, with multi-colored streaks and tips in his hair, and thinking, ‘Why are we the ones tagged weirdoes?'”

Gibbons and company took the era’s excessive ethos to a new level with 1976’s Worldwide Texas Tour, which featured a huge, Texas-shaped stage, 75 tons of equipment and a bevy of live animals, including buffalo, steer and snakes.

“That tour was definitely an all-time great,” says Gibbons. “Something of which we can always be proud. I’m not sure who originally thought that concept up, but like most of the ZZ Top think-tank sessions, it didn’t require too much on the pushing stage; the challenge for us is always pulling it back in and making it somewhat reasonable so that it could perhaps actually be accomplished. We still enjoy thinking about that tour, even though the animals often got better treatment than the band.”

We asked Gibbons to reveal the sonic secrets behind four of ZZ Top’s most molten slabs of Seventies vinyl, a request he was more than willing to oblige.

“That is straight guitar into amp: a 1955 Strat with a stop tailpiece through a 1969 Marshall Super Lead 100. That fuzz sound in the lead and in the front and back end of the composition is just pure tube distortion. Pickup-setting differentials account for the different tones. The opening part was played on what we used to call ‘the mystery setting’ in the dark days before the existence of the five-way toggle switch, when finding that perfect ’tweener [in-between setting of a three-way pickup selector] required dedication.

“That Marshall amp, which was a trusted friend through the first six records, was an import brought over by Jeff Beck’s at-the-time tech. I had four of those babies, and they were my main road amps for years. I ran them through cabinets with those [Celestion] Greenback speakers. They still retain a distinctive, rich, enjoyable tone and are well worth owning. I must, however, advise anyone fortunate enough to find one to beware of the variable power plugs. The 220[-volt] setting doesn’t work very well outside of the 220 countries, as I can tell you from experience. We had more than a few paper-clip nights over the years [due to blown fuses].”

“The first three albums were recorded exclusively at the Robin Hood Studios outside of Dallas, and the special sound that always seemed to be accessible there was due in part to the fact that the equipment was nailed to the floor and nothing ever moved so you could always count on a sound. Quite a good sound, I must say.

“ ‘Tush’ was Pearly Gates, my beloved Les Paul, played through the same Marshall Super Lead, and we sure enough did stop and enjoy the G tuning for the composition’s slide element. This song was largely straight guitar to amp, but I also utilized a real odd, esoteric device called the Cooper Time Cube, which was a simplistic application of the complex world of physics. In a small rack-mounted can sits a small speaker, right up next to maybe 50 feet of one-inch rubber tubing, which is coiled, spring-like. The sound waves actually take longer to travel, having to make these corners, creating a type of delay which is quite unlike the familiar sound of a digital delay. That was a real left-field piece of gear which they had—and still have, I might add—in that studio. Some of the guitar sounds that appear to be doubled on the early albums are actually the byproduct of that oddball Cooper Time Cube.”

“I’m Bad, I’m Nationwide” Deguello (1979)
“We wrote this about the great Texas bluesman Joey Long, a Gulf Coast lead-guitar picker who appeared on a great number of wonderful records by the likes of Slim Harpo and Barbara Lynn. He played on Lynn’s great hit record ‘We Got a Good Thing Going,’ which was covered by the Stones, and which was really one of the important recordings that shaped my understanding of where it was I wanted to go with my life. It was good. And so was he.

“Joey loaned me a multistringed mandolin-like instrument from Parral, Mexico, and I put it to good use on ‘Nationwide.’ If you listen closely, you can hear close-miked mandolin-sounding rhythm accompaniment. The lead track was played on a custom-made, half-size, real short-scaled guitar tuned to G. It was actually standard tuning cranked up a minor third, which remained quite playable thanks to the guitar’s short scale.

“The song’s tail end alternates between three distinct effects created by two pedals: an Echoplex doubler and a Maestro octave box alternating every third bar between having the octave up and the octave down. The song also contains some Hohner Clavinet, which was owned by one of our famous Memphis pals, Carlos De Marlos. It’s such an interesting sound that it

“Cheap Sunglasses”  Deguello (1979)
“This song was actually written during a trip from the Gulf Coast up to Austin, Texas. A bright spot of creativity flared as we were passing the hamlet of La Grange, and I recited all three verses of ‘Cheap Sunglasses’ within the space of 20 miles. And that’s the way they stayed. Though that may sound simplistic, the lyrics speak for themselves. ‘Simplistic’ is indeed a word which may come to the minds of some.

“The lead track was performed on a fake Fender guitar, which I used for the wiggle stick—there is a little dive bomb in the solo section. I played it through a Marshall Major, a short-lived 200-watt beast, which had one blown tube. Hence the rather bulbous, rotund sound. There’s also a little bit of digital delay for that Bo Diddley impersonation at the tail out, and a Maestro Ring Modulator, which produces the strange tag to each verse. It appears three times, and it’s a pretty funny sound. That is one insane effect put to good use.”