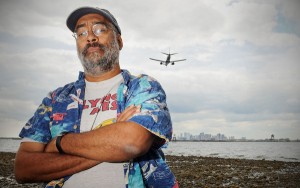 photo from the Lexington Patch

This is a sad story about musician Vance Gilbert, who was utterly charming when he played last year or the year before at a local outdoor concert. He was removed and then put back on a United flight for the other day for… reading a book about 1940s Polish aviation?

He explains the situation himself simply and eloquently in this blog post containing the letter he sent to United.

It’s hard to move past the conlcusion he makes that he was guilaty of flying while black (and reading antique aviation books), but it’s also a larger symptom of the crazy paranoid era we live in. Obviously, some paranoia is justified, but this?