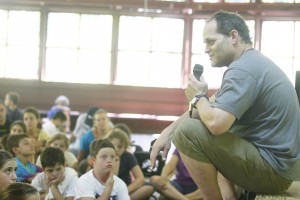 I recently became a camper for the first time in almost 30 years when I spent a day at Camp Coleman in Cleveland, Georgia. Technically, I was more of a counselor, since I spent 24 hours there meeting with campers to talk about travel, writing, China and music, but I felt like a kid, because walking through those gates brought me back to some of the happiest, most adventurous days of my life.

I really haven’t spent a lot of time dwelling on my camp experiences, but they played a huge role in making me who I am and set the table for a lot of what has come since. 24 hours at Coleman got me thinking about those days and about why I am so happy to see my own kids head off to camp, an act that seems downright cruel and bizarre to some, who didn’t grow up with this tradition.

I attended Emma Kaufman Camp outside of Morgantown, West Virginia. That is a Pittsburgh JCC camp. Much to my mother’s displeasure, they basically just rolled a bus through our neighborhood and all the same rascals jumped on with a duffel bag and disgorged 60 miles south and ran around the dirt of the mountains instead of the dirt of Schenley Park. She thought we should be expanding our minds and meeting other kids, kids from different neighborhoods, and even, gasp, different cities. She had the right idea, but she was ultimately wrong – because going to camp was expansive in and of itself. And being with the same kids without any parents around was an entirely different bowl of soup.

All three of my kids are at Sprout Lake in upstate New York for 3.5 weeks. It’s only been five days and I miss them a lot, but I am very happy and excited for them, all the more so since their departure came hard on the heels of my own visit to Camp Coleman, which reinforced my strongly positive thoughts on camp – and Jewish camp in particular.

I ended up there because the director Bobby Harris was a counselor at EKC. Though we have not really stayed in touch, we have many mutual friends and thanks to the miracle of Facebook, he was well apprised of the release of Big in China and all my recent activities. He thought I might be an inspiring presence for his campers and I hope he was right. They certainly inspired me.

My first takeaway is simple: the kids are alright. Everyone can quit worrying about them so much; they can do more than you think if everyone would just back off and let them. I met with campers ranging in age from 8 to 16. I spent more time with the older crew, but across all ages, the kids were lively, engaged, confident and questioning.

I spoke to them in different groups, I ate my meals with everyone in the dining room and I led the camp through a few songs, including a sing-along of my original tune “Got Love If You Want It.” It was a thrill to have the words up on a big screen and 400 people singing along with me.

I enjoyed my brief visit immensely and it left me feeling that the kids who were at Camp Coleman were very lucky to be where they are – in a safe, loving environment where they can meet new friends, learn new things about themselves, make new friends and deepen their understanding of the world, themselves and their faith. They were, in other words, at Jewish camp.

Expat Women Interview with me, a Man…. Ladies and gentleman, on the lap steel and harmonica, Mr. Woodie Wu!
Scroll to top