It’s no secret to most people reading this blog that Gregg Allman and the Allman Brothers Band have been a profound influence and source of inspiration for me. Last winter, on the heels of a liver transplant, he released Low Country Blues, his first solo album in 13 or 14 years. 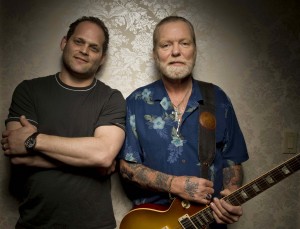 Me and Gregg, NYC, March 2009. Photo by Rayon Richards

It was hailed as a return to form and it’s very good, though his voice on it really does not sound as strong and flexible as I have heard it lately live – including at the CD release show for the album last January at the Bowery Ballroom. I hope that he hits the studio again soon, and adds more of the pedal steel flourishes that bring out his gentler, cosmic cowboy side. His music can be achingly beautiful, a la “Multi Colored Lady” and “These Days” and I’d like to hear more of that side captured.

I interviewed Gregg last fall when he was in New York for T-Bone Burnett’s Speaking clock Revue at the Beacon, which was Gregg’s second return to the stage following his surgery. We met in his midtown hotel room and had a casual, relaxed talk over coffee. The short story below ran in Guitar World. I will try to dig out some of the great outtakes I could not use and run up here separately.

Gregg recently cancelled a strong of shows on doctor’s orders, reportedly because he needed to rest. I hope it’s nothing more and that he’s back to the stage soon. There’s nowhere he’d rather be.

I was, of course, very proud when Gregg agreed to read a galley of Big in China and then gave me such a nice quote about the book. Some of it is the ad above, but here it is in full:

“What a romp. After writing about music for years, Alan Paul walked the walk, preaching the blues in China. Anyone who doubts that music is bigger than words need to read this great tale.”

“Look at this.” Gregg Allman pulls up his long-sleeved Harley-Davidson T-shirt and reveals two long, pink scars running diagonally up his midsection just below the rib cage.

He’s sitting in a New York hotel room, less than five months after receiving a liver transplant, without which he would have died. The 63-year-old Allman is looking hale and hearty, his thick blond hair pulled back in a ponytail as he sips a cup of coffee.

“I’m happy to be here, that’s for sure,” he says. “And I have a sense of urgency to get stuff done, get out there and make some great music.”

Allman is gearing up not only for a year of touring with the Allman Brothers Band but also for solo dates in support of Low Country Blues, his first solo album in 14 years. Produced by T Bone Burnett, the collection features original takes on blues chestnuts and a haunting new original co-written with Warren Haynes.

“When Bone said he wanted me to come to Los Angeles and leave my band behind, I said, ‘Hell triple no,’ ” Allman recalls, with a laugh. “Then I realized maybe it was time to try something new, and I’m glad I did.”

Allman grooved on Burnett’s old-school recording approach, cutting live with everyone in the room, using upright bass and analog effects, like tape echo. And he was thrilled when he learned the house band would be anchored by old friends Dr. John (piano) and Doyle Bramhall II (guitar). “Me and Bone got along from here to the horizon,” Allman says.

The hardest part of his recovery, he says, was taking four months off the road. “That was the longest I went without performing since I was 16,” Allman relates. “I am fiercely devoted to my music, and I’ve got a lot of gypsy in my blood, so I’ve never minded the road. I just love to play, man.”

Is Catcher in the Rye overrated? Wait. Did Sarah Palin hook up with Glen Rice?
Scroll to top