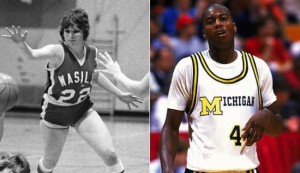 Now, for a radical change in directions. I came across this rather remarkable tidbit about Sarah Palin and Glen Rice having a one-night stand when U-M was up North for the 1987 Great Alaska Shootout.

Could it be? The Deadpsin source, it should be noted, is the National Enquirer, but their source is  The Rogue, the upcoming Palin bio by Joe McGinniss.The author is not without his controversies, and I have not read enough of his work to take a strong stance. But I’m pretty riveted by the excerpts that Doonesbury is cleverly running.

According to this post, Rice confirmed the hook-up in the book.

I was at U-M rooting hard for Glen Rice in 87, and I had a few pretty funny encounters with him around campus. I am trying to remember who covered the basketball team for the Michigan Daily in 87 – it may well have been Adam Schefter of ESPN. Those hoops guys certainly strutted around campus pretty good. One old flame, a looker by anyone’s definition, had a class with pg Gary Grant, who once handed her a business card that read Gary “The General” Grant and had a military seal and said, “Perhaps you’d like to call me some day.”