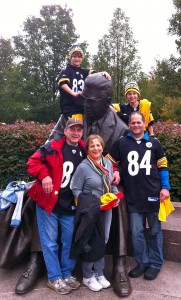 With the Chief, pregame. 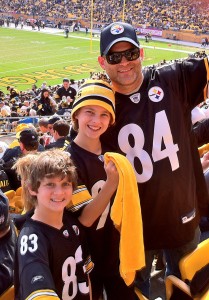 It’s official. My children are now part of the cult of Steelers Nation – I took Jacob, 13, and Eli, 11, to their first game yesterday, along with my mother and father. I drove 350 miles each way by myself so they could be a part of this thing.

It’s hard to explain what this whole thing is about, or why I, or anyone cares. The closest I have come was in this piece for the WSJ about watching the 2005 AFC Championship game in a bar in Beijing at 4 am.

Part of what I wrote:

I’m a hardcore Steelers fan, like most people I know with Pittsburgh roots. I grew up there in the 1970s when the team was a football power and loyalty to them was assumed and profound. Though I have not lived in Pittsburgh since I graduated from high school in 1984, I remain intensely devoted to my hometown. So do most of the people I grew up with, despite being scattered around the world in a proud diaspora.

For me and my friends and siblings, retaining a connection to Pittsburgh is definitely a big part of our love for the Steelers, but I’m not sure it’s any bigger than maintaining connections to one another. I watched quite a bit of the MLB playoffs over the past few 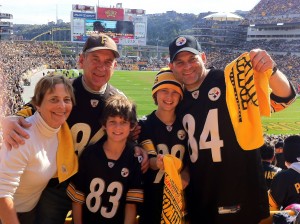 weeks and it’s amazing how silly a stadium full of people waving white towels looks when you have no emotional involvement in the game. Yet sitting in Heinz Field waving Terrible Towels with my sons and my parents feels like the greatest thing in the world. 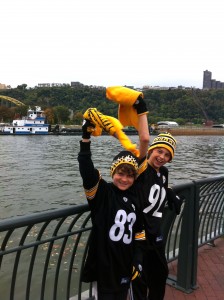 Pregame, on the river... They were waving at tugboat/barge crew, who came down the river flying a Polamalu flag and standing in the bow waving towels.

There have been times when I have felt a bit guilty about saddling my kids with my own sports allegiances, to a city they do not call home, but I think that the more sense of belonging anyone has, the better. And I know for sure that watching sports together is something that has always kept a line of communication open between my father, brother and I. It’s just how a lot of men (and some women, to be sure) communicate.

If this all seems like too much brain power spent writing about taking my sons to their first NFL game, I’ll end with a simple summary: welcome to Steelers Nation, boys. It’s a fine cult to join. 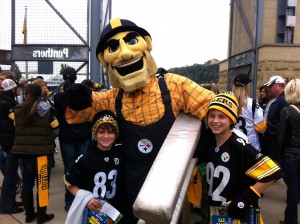 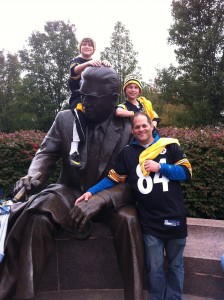 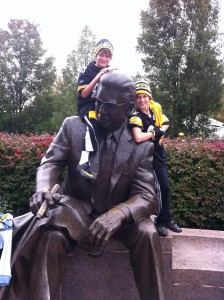 Steely McBeam.. I thought he was retired, but the boys were excited.

My report from Clapton’s 2010 Crossroads Festival From my Slam archives: Original Old School with Jerry West
Scroll to top