Once again inspired by Jim Yardley’s wonderful new book Brave Dragons: A Chinese Basketball Team, an American Coach, and Two Cultures Clashing, I present my own experiences with Chinese basketball.

I am in the process of interviewing Jim and in the next week, our conversations will be popping up in a couple of different places, covering his book, basketball in China, what it shows about how the country is and isn’t changing and, yes, Jeremy Lin. 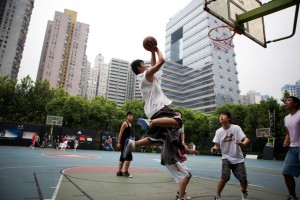 This article, adapted from my book Big in China, originally appeared in Slam magazine.

When I moved to China in 2005, I wasn’t sure what I’d be doing, other than exploring my new home. We were going because my wife had a great job offer with the Wall Street Journal and I craved adventure. But I was leaving behind my beloved gig as a SLAM Senior Writer, or so I thought. SLAM opened a Beijing bureau, with me as its chief, as a favor, so I could get a sought-after journalist credential. I wasn’t sure how relevant basketball would be to my life in China, but it didn’t take long to realize that being a hoops insider there could not only open some unexpected doors, but also be a lot of fun. 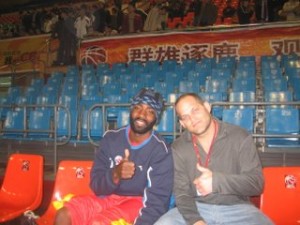 Me and God (Shammgod) in Taiyuan 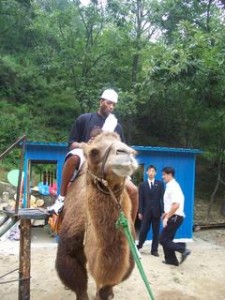 Days after arriving in Beijing, I was hiking the Great Wall with Tracy McGrady, in town to launch a new shoe. He was at his peak, a five-time All-Star coming off a season of 25.7 ppg, 6.2 rpg and 5.7 apg. Here, he was a true superstar because every Rockets game was televised due to Yao. I hiked the Wall by T-Mac’s side, trailed by a pack of Chinese journalists. I chatted with him and his pack of friends and trainers and watched him bargain (poorly) for souvenirs. I was there when he insisted on climbing up on a musty camel for a short ride—the only time I ever saw anyone do so even after I visited the same place and passed the same animal dozens of times. I had been covering basketball players for a decade but had never witnessed anything quite so intimate and silly; back home, we stumbled all over ourselves to get the kind of inside access that was now just falling in my lap.

I also learned a lot riding around with a van full of adidas execs, who explained that the Chinese market was a battleground. This is why McGrady’s visit to Beijing was preceded by a visit from LeBron James and followed by Allen Iverson, and why giant billboards of all of them loomed over the city. Our little convoy was escorted through the city’s slow-moving traffic by police cars and motorcycles with flashing lights, evidence of McGrady’s—and the NBA’s—status in China.

A few days later, I visited Beijing’s massive central police station with Mr. Dou, the Journal’s Beijing driver and fixer. Like most people in his position, Dou was at first intimidating, a former military man who was loyal, efficient and skilled in maneuvering the Chinese bureaucracy. It felt good to have him on our side, even if he seemed a bit puzzled by me, as a male tai tai (lady of the house), who was married to the boss and didn’t have a job. 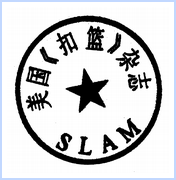 The Slam Chop that made us official

We were at the station to secure our long-term visas. My approved journalist credentials as SLAM’s Beijing Bureau Chief were attached to my application. I was intimidated by the long lines of people waiting behind rows of desk-bound, uniformed officers, but Dou walked directly to the front and dropped our papers in front of an officious- looking cop. The officer began reading through the papers, marking every other page with a chop, the ink stamps without which nothing is official in China. Suddenly, he stopped and looked up at me. I braced myself for whatever the problem was.

He smiled and said, in rough English, “I very like SLAM.”

I had been a SLAM senior writer for a decade and knew that the magazine had die-hard readers. But I did not realize how far its reach extended. I thanked him and he asked, “Who do you think is best Chinese basketball player, after Yao Ming?”

Mr. Dou watched this conversation with the shocked expression of someone listening to cats chatting. He and the officer had an animated discussion, and Mr. Dou looked at me and chuckled. Something had changed in the way he regarded me; I had earned some face.

I saw this cop, whom I nicknamed Officer Hoops, every year when I renewed my visa and we always talked ball. It made the visits easy and fun and once greased the wheels despite some mistakes on the application. Afterward, he ran after me and asked me if I would join him for a run some day. “Sure,” I said. “Just call me.”

Hoops called on a Sunday morning a few weeks later. I jumped in a cab and showed the driver the address Hoops had texted me. It was winter and I assumed we were going to a gym, but we pulled up to a large complex of outdoor courts, each running 4-on-4 half-court games, ringed by a few packed soccer pitches. I paid 10 rmb (about $1.50) admission and entered.

My game—mediocre at its peak—was rusty, as I had not played in the two years since arriving in China. I walked on the court and everyone stopped to check me out. I knew what they all were thinking: “This is the American basketball guy?”

“Can you dunk?” Hoops asked.

I laughed but didn’t say, “I’m not even sure I can touch the net, but 23 years ago under the guidance of my man Ice, I squeaked a tennis ball through the rim at Davis Park.”

“Oh,” he replied. “You just work for Dunk magazine.” Then he repeated that in Chinese and everyone laughed.

They were all savvy, solid players. There was one big guy on my team, about 6-5, with long black hair pulled into a ponytail. He was wearing a black Air Jordan tracksuit and in between games, he headed over to the chain link fence to sit down and suck down cigarettes. There was one other guy about my age—40—who delighted in bodying me up and battling for boards. 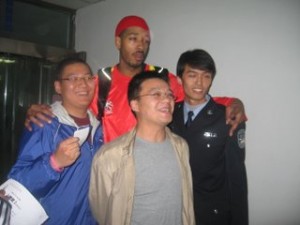 The other guys were a decade younger, but their games reminded me of countless old guys I’ve played against at JCCs and Ys. They were awkward but understood angles, were tough, could hit bank shots and put in ugly looking jumpers and little runners. The big guy was skilled but lazy and kept calling weak fouls that would have led to raging arguments at an American playground. I didn’t know how to say “foul” in Chinese and don’t believe in anything but the most vicious hacks being called on the playground anyhow, but others called a few for me.

My first two shots were airballs and my left contact lens got knocked out, so I played with one eye. But I gained steam and defended the honor of, ahem, Dunk magazine, passing and defending well, getting a lot of offensive rebounds and put-back baskets and swishing a few foul line jumpers—my one sweet spot. The sore hamstring was well worth it; especially since Hoops told me to call him any time I needed anything.

The power of SLAM presented itself in the unlikeliest of times and places. My Chinese teacher Yechen was a quiet intellectual who would eventually leave Beijing to become a monk on a holy mountain. He once took me to an ancient Buddhist temple deep inside one of Beijing’s maze-like hutong neighborhoods.

We found it after a long stroll, trailed by yapping street dogs at our feet and an army of cats silently hopping along the roofs above. Small kids in padded winter clothes peered at us from behind their parents’ bikes and doorways. I felt a million miles away but closely observed. At the entrance of the peaceful little temple, an old man sat inside a ticket booth. I looked over his shoulder and laughed; the walls were plastered with SLAM posters of KG, Kobe and LeBron.

“I work for that magazine,” I said, pointing. He smiled and waved me in.

NBA players kept coming to China. I interviewed TJ Ford in the shadow of a giant statue of Chairman Mao when he was visiting a sports university for an adidas camp. There, I also watched Dwight Howard dunk on a teenaged Zhou Peng, then the camp MVP, now a member of the Chinese National Team. The blurry video I took of this moment just to show my friends at the SLAM Dome now has over a half-million YouTube hits, which keep coming.

The ultimate basketball moment came during the ’08 Olympics. I was in the Wukesong Arena for almost every minute of the Redeem Team’s triumphant march to Gold, covering the games for NBC.com and SLAM. Before the first game, Officer Hoops called.

“Hello,” he said. “Is there any way you can get me a ticket to see the USA basketball team play? It is my dream.”

These were the most sought-after tickets of the Games, but I promised to try. When a friend told me that he had an extra pair of tickets hours before the game against Greece, I called Hoops right away.

“Oh my God,” he said. “I have to work and cannot get out of it. Thank you so much. Some day I will see these guys play in person.”

A few months later, the Warriors and Bucks were at the same arena, for the annual China Games exhibition. I was leaving Beijing in two months and was feeling sentimental about what was likely to be my last China hoops experience. I heard someone call my name as I walked through the hallway, just around the corner from where I had watched President Bush wish the US team well. I looked around blankly.

“Alan! Over here! It’s me, Wang!” Officer Hoops stood waving by the edge of the court. He was wearing an entirely different uniform; the military style greens of the Public Security. He was smiling broadly under his peaked cap.

“I switched positions with a friend for this game,” he said with a twinkle in his eye. “I am finally living my dream of seeing an NBA game in person.”

Now I could leave China in peace. The world seemed right. I sought out my friend before leaving and made sure I said a proper goodbye.

This story is adapted from Big in China: My Unlikely Adventures Raising a Family, Playing the Blues, and Becoming a Star in Beijing (Harper). Copyright 2011 by Alan Paul.

One Way Out – Jamming with Andy Aledort
1 reply