“If you want to know the real deal, read Alan Paul. I learned a lot reading One Way Out.”
-Oteil Burbridge, the Allman Brothers Band 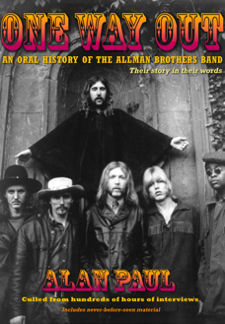 “No journalist knows the ins and outs of the Allman Brothers Band better than Alan Paul.”

I am proud to announce that St. Martin’s will be publishing a greatly expanded hardcover version of One Way Out: An Oral History of the Allman Brothers Band in March, 2014, to coincide with the band’s 45th anniversary. The book will be up to 5 times longer than the original Ebook version and far more in-depth. The entire design, including the cover will be new.

I have also taken a few trips to Macon and done some great research in the Big House Museum archives.

Many, many more interviews are in the works. I’m not quite ready to share who is writing the Foreword, but it’s a band member and it’s going to be great.

The book will also include at least 50 photographs, including many never-before-seen images. I am still working out rights and details, so can’t get more specific at this time, but the book will feature great work by great artists.

I will be taking the current Ebook version of One Way Out down by the end of March, to clear the plate for what is to come. I am incredibly excited about this project and look forward to sharing it with you all. Thanks for the interest and stay tuned for updates.

It also includes: a highly opinionated discography with short reviews of over 50 albums from the ABB, Gregg Allman, Dickey Betts, Gov’t Mule, Derek Trucks Band and more.
One Way Out is the most complete exploration of the Allman Brothers music yet written and makes for a great companion read to Gregg’s best-selling memoir My Cross to Bear. It tracks the band’s career arc from their 1969 formation through their historic 40th anniversary star-studded Beacon run, right on up to today. The book is filled the musical and cultural insights that only these insiders can provide.
One Way Out includes the most in-depth look at the acrimonious 2000 parting with founding guitarist Dickey Betts; an intense discussion of Dickey Betts and Duane Allman’s revolutionary guitar styles; thorough behind-the-scenes information on the recording of At Fillmore East, Layla, Eat A Peach and other classic albums. You will not find this information anywhere else.