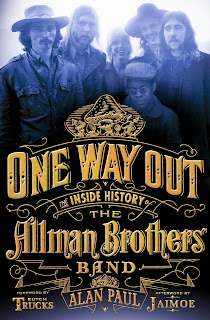 St. Martin’s will be publishing One Way Out: The Inside History of the Allman Brothers Band on February 18, 2014, to coincide with the band’s 45th anniversary.

This is intended to be no less than the ultimate word on the greatest band in rock history.  I interviewed over 50 people, including all surviving band members and many friends and associates, including Eric Clapton, the late producer Tom Dowd and four of the band’s managers, including the late Phil Walden.

One Way Out is the most complete exploration of the Allman Brothers music yet written, tracking the band’s career arc from their 1969 formation through their historic 40th anniversary star-studded Beacon run, right on up to today. The book is filled the musical and cultural insights that only these insiders can provide.