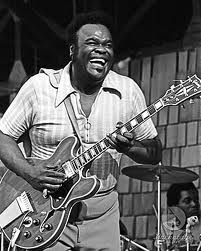 It’s an appropriate quirk of fate that three of electric blues’ most revered guitarists share the same regal surname: King. But while Albert and B.B. became grand old men of the blues, Freddie King never received such an opportunity, dying of heart failure in 1976 at age 42.

Freddie (spelled Freddy early in his career) was a towering figure, both literally (he stood a barrel-chested 6-7) and figuratively, with a thick, meaty tone and fast, extremely aggressive picking style. His manly but melodic playing was a huge influence on countless blues and rock guitarists, notably Eric Clapton, who made his mark by nailing King’s hit instrumental “Hide Away.”

Uniquely, King straddled the very different worlds of Texas and Chicago blues. A Lone Star native, he moved to the Windy City at 16. He cut his teeth with the likes of Muddy Waters before joining Otis Rush, Buddy Guy and Magic Sam at the forefront of a new generation of more urban, hard-edged guitarists. “I picked up [my] style between Lightnin’ Hopkins, Muddy Waters, B.B. King and T-Bone Walker,” King explained in a 1971 interview. “So I play [both] country and city.”

After scoring several r&b hits, both instrumental and vocal, King moved back to Dallas and joined T-Bone Walker as a Texas standard bearer. “He was the greatest, most serious player,” recalls Jimmie Vaughan. “Everything he played sounded like he had worked it out beforehand, but it was just the way he played.”

King died on December 28, 1976, at the height of his popularity. He is buried in Dallas’ Sparkman-Hillcrest Memorial Park.

And if you want to know how to learn some Freddie licks, my Guitar World pal Andy Aledort has you covered:

More of this here at GuitarWorld.com.

Albert Collins with the Allman Brothers
Scroll to top