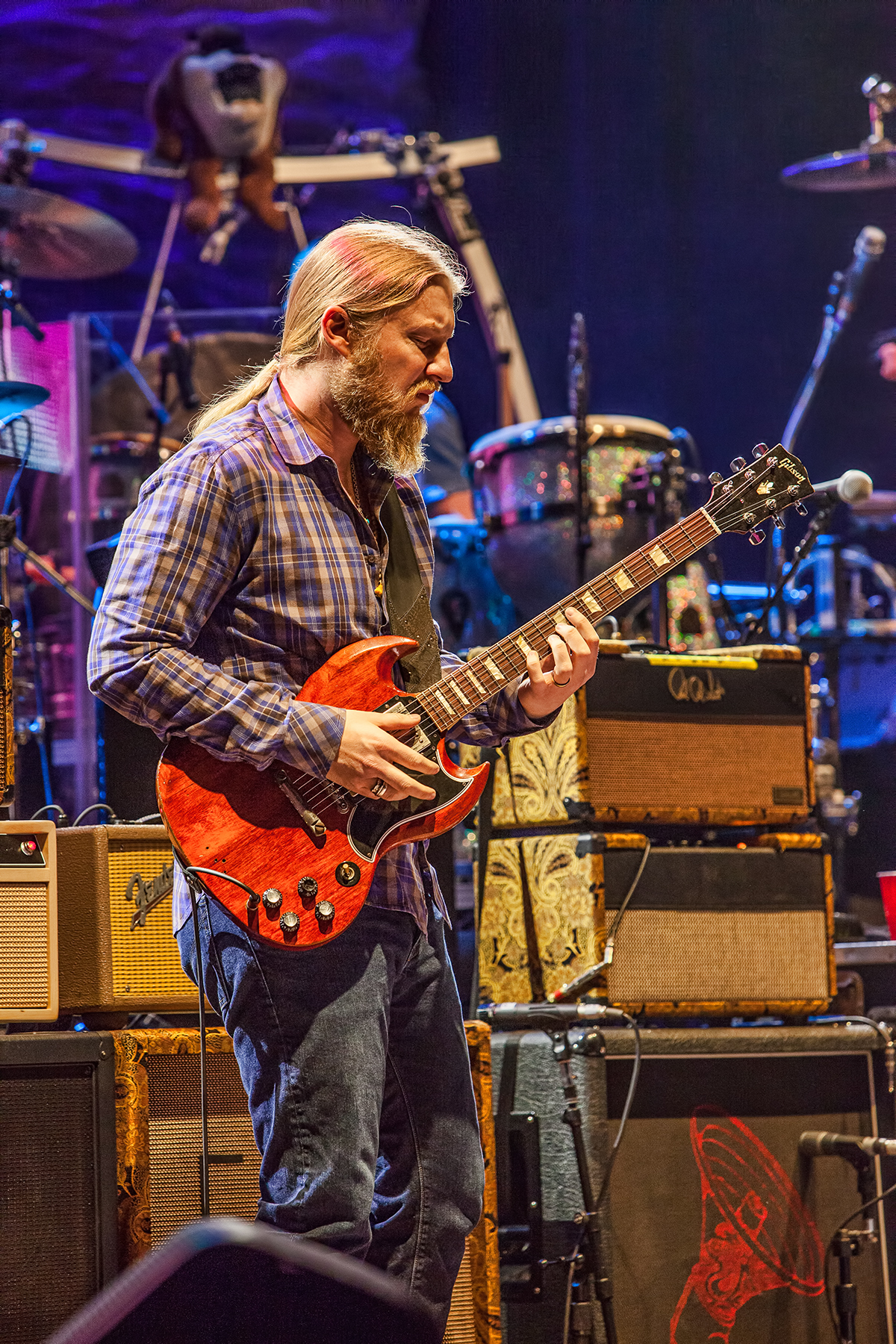 Derek at the Beacon. Photo by Derek McCabe

In January, Derek Trucks and Warren Haynes issued a joint statement that they would no longer tour with the Allman Brothers Band after this year.

Though Gregg Allman said in an interview that the guitarists’ departure would likely mark the end of the band, which is currently celebrating its 45th anniversary, the band has not released any official statement and their future plans remain unknown.

Last weekend at the Wanee Festival,Gregg suddenly declared that the “rumors” were untrue and the band would continue. Who knows what comes next? They are certainly giving me material for the final chapter in next year’s paperback edition of One Way Out: The Inside History of the Allman Brothers Band.

I spoke with Derek as the band was beginning their March run at New York City’s Beacon Theatre. They played 10 of 14 shows before postponing the final four because Allman was unable to perform after an illness which the band announced was bronchitis. They have not yet announced when the shows will be played.

Click here to read an exclusive interview with Warren Haynes on his thoughts on leaving the Allman Brothers Band.

Why did you decide to leave the Allman Brothers at the end of this year?

It’s something I’ve been thinking about for a long time. I want to see the legacy end as it should — at the top. I don’t want to see Joe Montana in Kansas City or Muhammad Ali at the end of his career. It’s a rare thing to be able to go out on top and in great shape, and I think it would be great, but it’s ultimately not up to me, but to the original members, if they will continue.

Right. And people are waiting for a statement that hasn’t come, which would seem to indicate that Gregg, Butch and Jaimoe have not made up their minds about the future.

I‘m hoping that if it continues, it’s because it’s supposed to and not for personal reasons. I think from Duane until now, the band has given everyone so much and at some point you have to honor the legacy with real dignity.

I was watching Leonard Cohen receive an award in Spain and I was struck by acceptance speech, with him talking about how everything has an end but you need to recognize and honor it and treat it with dignity. He said that if you have the ability to treat the end with real dignity and beauty, that’s what separates things. I thought that was apropos to our situation.

I understand what you’re saying, but also understand why it’s hard to stop something that is still working very, very well.

Yes, but at some point, you have to step away. With all the ups and downs of the band, it’s been an amazing, unique story — as you know as well as anyone! And if you can go out the right way, it keeps the story amazing to the end. It might be a hard thing to do, but to me, it’s the right thing to do.

Why did you and Warren elect to make your announcement together?

I think it’s more powerful that way. The information was leaked out in January on the Jam Cruise, and it was going to come out one way or the other that I had decided not to tour with the Allman Brothers after this year, and I just wanted to get out in front of it

I was really happy that Warren decided to be with me, but that was, of course, up to him. It all happened really quickly; information travels quickly these days. I was leaving for a tour and I started getting these emails asking questions and basically saying, “We’re going to run with the story. Do you want to comment?”

Obviously I’ve been thinking about it for a while and I just decided to jump on it.

The statements by you and Warren were very eloquent. Did you really write them in response or did you have them ready?

Thanks. We wrote them in response. I spoke to [Tedeschi Trucks Band singer] Mike Mattison who has a great way with words and helped me craft my statement. Then I sent it to Warren. I didn’t want to implicate him at all if he wasn’t ready. Half an hour later, he called me and said, “Do you mind if we change the first paragraph from I to ‘we’ and I add my own statement?” 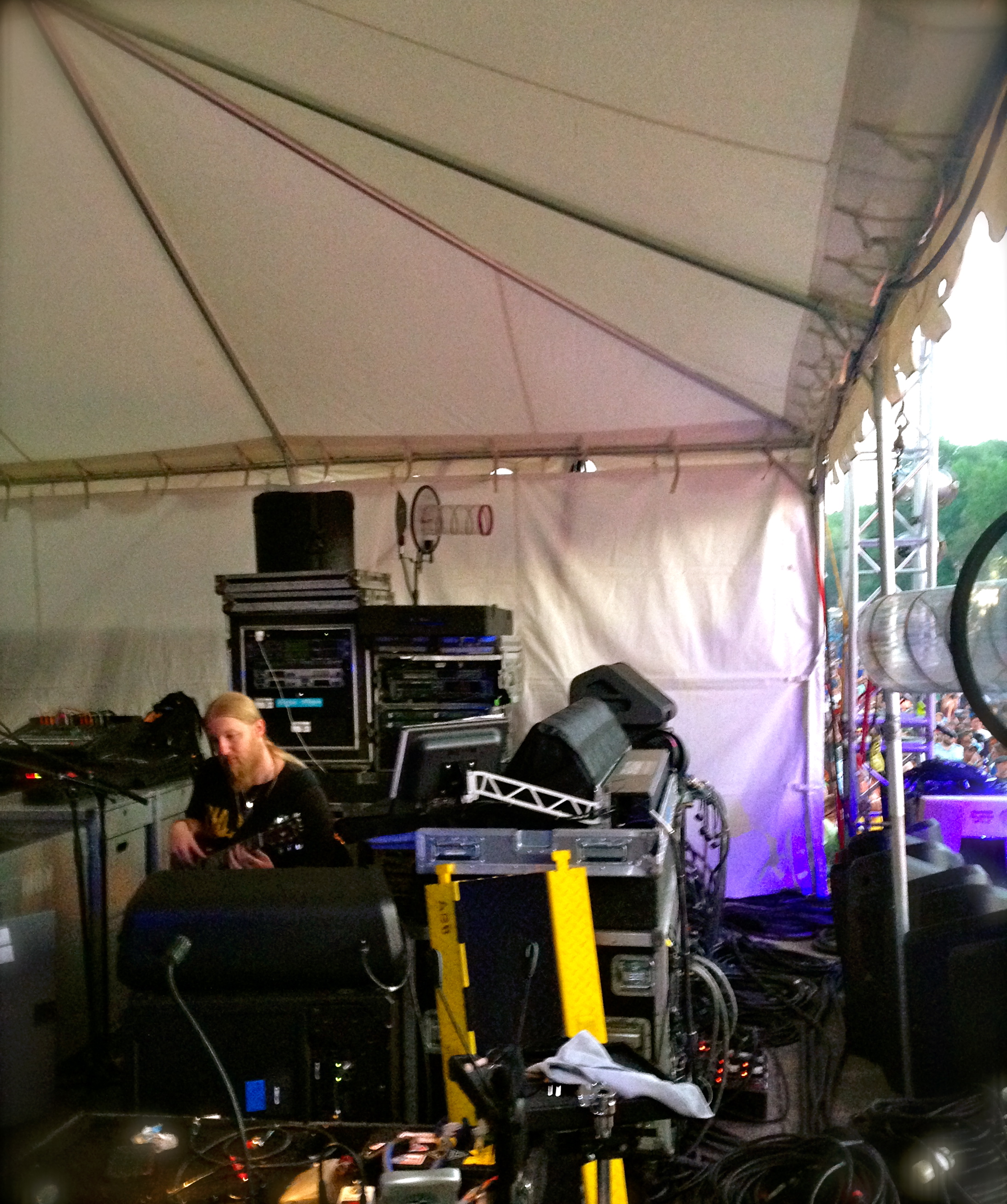 Derek Trucks getting ready to go on stage with Gov’t Mule, Wanee 2014. Photo by Alan Paul.

Can you just explain a little why you have decided to do this now?

Really, it’s more time at home and more time focusing on one project. Since I’ve been an adult, I’ve never had the opportunity to go full steam on one project. I love all the amazing opportunities, but it’s going to be great to wrap my head around one and see what we can do.

I’ve been in the Allman Brothers for 15 years, and the whole time I’ve also had my solo career and it’s been wonderful but very busy, and frankly I’ve missed a lot of my kids growing up. I’ve never been home for one of my son’s birthdays. It’s March 6 and I’ve been at the Beacon every year. I want to jump on the last remaining years I have with my kids before they are fully grown up. We’ve managed it really well and been very fortunate to have family close by to help out, but it’s time to simplify and refocus on my own band and my family.

Anyone with a family can understand that desire. On the other hand, the Allman Brothers have toured less and less and it doesn’t seem like a huge time commitment.

Right, everyone thinks that, but there’s also travel, rehearsals, the difficulty of scheduling. And even if it’s “only” three or four months a year dedicated to the Allman Brothers, that means you start the year with eight or nine instead of 12 and it gets chopped up pretty quickly. I don’t think I’ve had a month at home since I joined the Allman Brothers, and I’m ready for that.

The band has done a remarkable job for 45 years at finding great new players to replace seemingly irreplaceable members.

Yes, and who knows what will happen next. I would never bet against an Allman Brothers’ resurrection. There have been a few times I thought it was over, and we came roaring back.

There’s something about the storyline that sets it apart. You have to give back to the institution and even though it may seem counter–intuitive, it may be that the best way to do so is walking away. I respect the band and the music as much as anyone does, and it’s been amazing being a part of it, but I also feel like sometimes you have to step back from it and think what’s best for the legacy of the group.

Warren and I and a few of the other guys in the band have had long heart-to-hearts about this and really believe we have the chance to go out and throw down. Going out with guns blazing, giving it everything you’ve got, is a lot better than limping across the finish line. No one wants to see that happen. If I were writing the story, that’s how it would go. But a lot of people are in a lot of different places personally and musically.

You seem very calm and at peace with your decision.

My feeling always is, if you can continue to put your heart in for the right reason and keep roiling then you should do so. Now I feel much as I did when I put my solo band aside in favor of [Tedeschi Trucks Band]. Some people didn’t understand why I would do that, but I just thought it was time.

And from the first day of rehearsal, it feels really fresh and new and honest, maybe in a way it hasn’t since the 40th anniversary. I’m excited about getting on stage every night and playing every show like it’s the last show. You try to have that feeling every time you go on stage, but it’s 100 percent different when it really might be true that It could be the last time you play this particular song with this particular band — so make it count.

The Allman Brothers turn 50! The story of their formation
6 replies

Review of All My Friends: Celebrating the Songs & Voice of Gregg Alllm...
Scroll to top