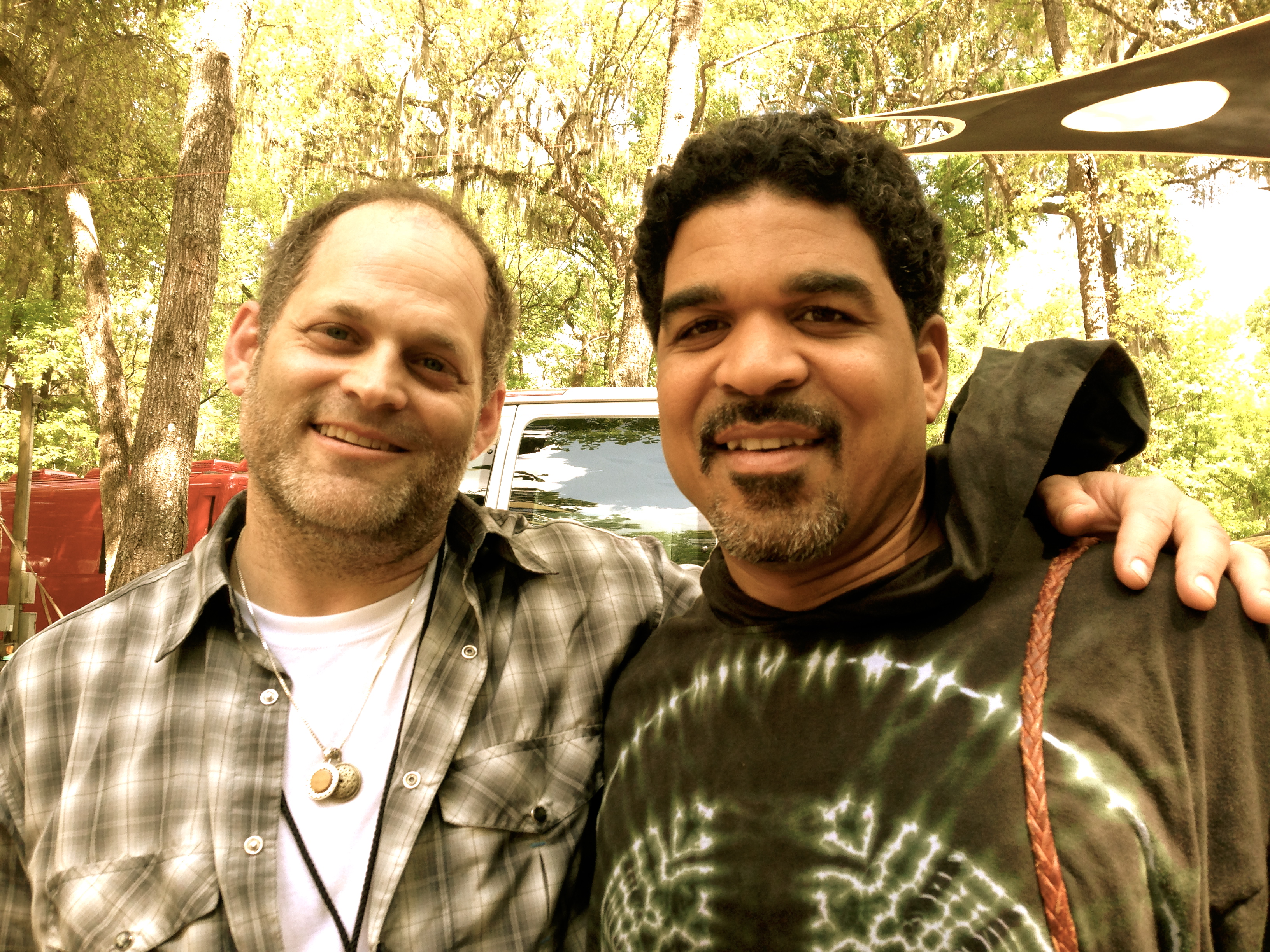 Oteil: “Thank you for this wonderful book. What a gift to receive it at the end of this chapter of my career. You helped me put the last 17 years of my life in perspective.”

So I saw Oteil behind the Mushroom Stage at Wanee and he gave me a big hug and said, “Thank you for this wonderful book. What a gift to receive it at the end of this chapter of my career. You helped me put the last 17 years of my life in perspective.”

Well, heck Oteil – thank you. What a message to get.

And what a pleasure it has been to receive constant feedback from readers of One Way Out: The Inside History of the Allman Brothers Band. they come by email via this site, through soe actual letters and through voluminous postings and letters on my Facebook Page, which I urge you to like and follow.

Here is a sampling of some of the great feedback. Thank you all. I feel honored to have been able to chronicle so much history of this band we love for you all and appreciate hearing from everyone about how the music has impacted your lives.

Hi Alan, You may know me as Mr. Belding from a TV show called saved by the bell but, back in 1979, I was the unofficial road manager, along with David Cloud of Momma’s Pride, of a brief tour with Gregory, Momma’s Pride and Overland Express that ended with the Allman Brothers reuniting!

I joined up after two separate trial gigs. One was in Myrtle Beach and the other in Chattanooga, Tennessee, which is where I’m from. Paul Burke in Daytona Beach was someone Gregg trusted and who I knew from Chattanooga. He knew suntan oil and I knew the music business. He asked me to come help after I saw them in Chattanooga. I jumped in my car the next day and drive to Daytona. 30 something shows of Gregory showing up and gaining strength personally, musically and draw-wise later, I watched The Allman  Brothers reunite, first as a surprise reunion in Central Park after Great Southern played and finally reformed at the Capricorn picnic in Macon.
It was an amazing time and I would love to share this with you. I saw you on Imus and know you are the right guy to share this with.
Cheers, Dennis Haskins

I finished your book… I had planned on reading it up to the about 1979 or ’80 and then not getting into all the additional negative stuff I knew was coming.  But I didn’t.  I kept reading thanks to your fine presentation, and to a degree, the “train wreck coming” factor.

I worked with the band once in 1980 or so when Bill Hoyt stage managed and Dan Toler and David Goldflies were in the band and Steve Massarsky was their attorney so I had a small personal interest as well.

I do have a note to add that you may or may not have noticed in your research.  As you know, distinguishing Dickey’s playing from Duane’s was a game many of us played in their early years.  I got my information about how to do that from a conversation with a friend in the about ’73 when a bar band named Wart Hog was just playing the hell out of the ABB’s music in San Luis Obispo, California every night at a bar named “The Irishman” but routinely called simply “The I.”

Your interviews with Dickey and others confirm what I had been told.  Rounder tones, etc.  But I’m sure there were hundreds of thousands of fans who were sent off on the wrong tack for many years and had the opposite rule of thumb to rely on until they were able to see the band live.

That misinformation comes from, of all places, the liner notes in “Beginnings.”  In the fifth paragraph, Jean-Charles Costa notes, “(if you listen a lot it’s not hard to tell them apart–Dickey’s guitar has a harder edge metallic ring to it.  Duane’s has a smoother, ’rounder’ tone).”

Obviously this is directly contradictory to Dickey’s comments to you in your book that, “He [Duane] had a spitfire, trebly sound with staccato phrasing and . . . my thing was more of a rounded-tone sound . . ..”

I think Mr. Costa really screwed that up.  I wonder if he ever learned of his error.

Thanks for the great book; I really enjoyed it.  Even the train wreck parts.

Very interesting and kinda crazy about the Beginnings notes. Thanks for pointing that out. -AP 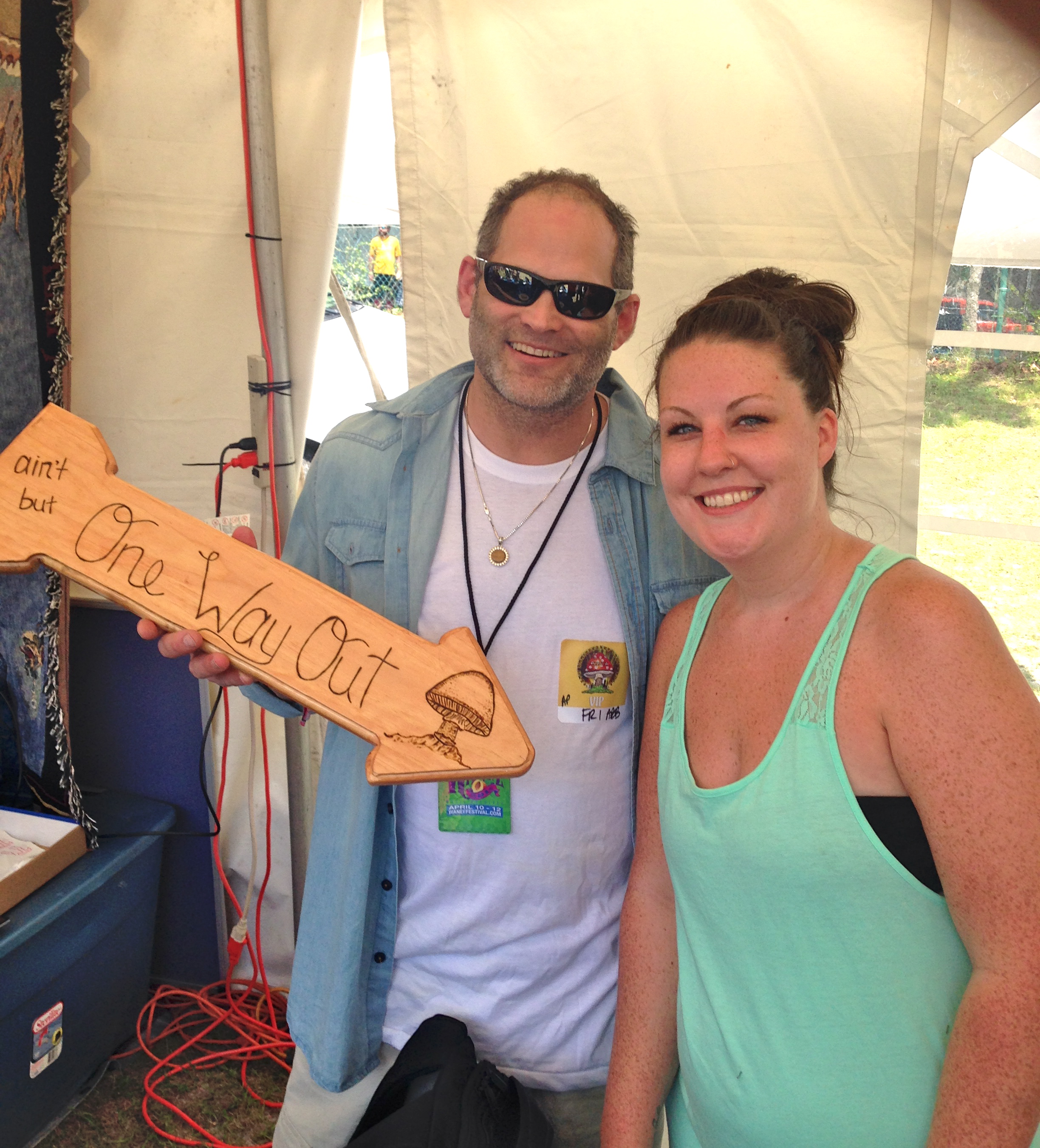 Reader Sarah Cornell made me this slamming sign and gave it to me at Wanee.

Hi Alan, just wanted to drop a quick note to you. I read your book and it was amazing! I was at the event at Eddie’s Attic a few weeks ago, and it was really great. I’ve been up to the Beacon run about 5 times, and I’ve caught them about 25 times over the past 10-15 years. I have a band in Atlanta (www.reverbnation.com/thebitteroots) and The Allmans are the main reason I play music to this day. Thank you so much for your energy and hard work pulling all this together and spreading the good vibes of the greatest band ever, The Allman Bros. Band!*

Perhaps it might seem strange to some people that a person  I never met could have such a profound affect on me, but Duane Allman literally altered the course of my life with the emotional intensity of his playing. Your book, as much as anything could, helped to make a connection to where that music came from.
Thanks again,
Bill Taylor
•
Hi Alan…first, congrats on One Way Out. It arrived in the post yesterday, and I finished it this morning over breakfast. Without a doubt the best book on the ABB. Thanks.
-Rick H

I felt compelled to write to you after reading your book this weekend.

I first saw the ABB at the Nassau Coliseum on April 30, 1973 (yes, the day before the archival release date).  A friend of mine was into them and suggested we go check them out.  I listened to some of the Live at Fillmore Album, definitely liked it and was anxious to see them.  We had great seats on the orchestra floor but i really didn’t know that i was about to be transformed.  I was 17 and had never seen music like that before.  Everyone knew Gregg Allman, but in the same breath most everyone was talking about Dickey Betts’ performance after the show.  The drum solo and Chuck were great conversation items too.  I became a big fan, saw them whenever I could and knew a lot about them…so i thought.  Your book was phenomenal.   It was riveting, interesting and insightful.  You gave me a whole different perspective on the band, most poignantly Duane’s effect on the band for years after.  Simply…great work, and thank you. 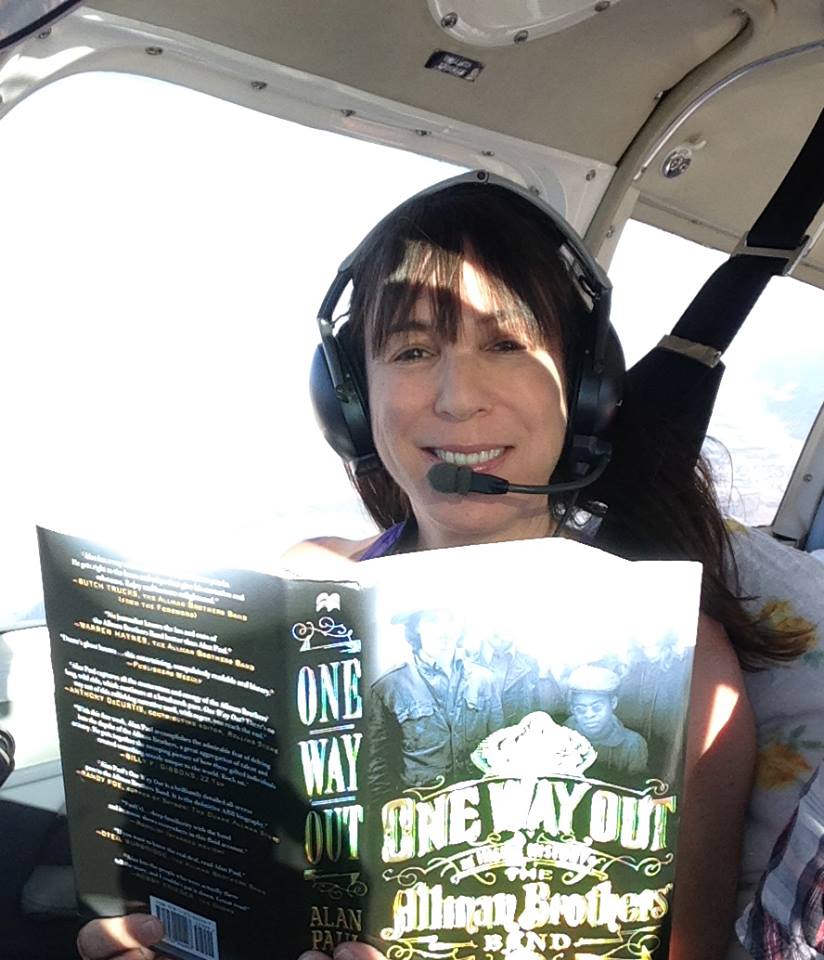 Anne Zcukerman Minkin reads while her husband, photographer Bob Minkin flies her around.

Just finished One Way Out  and LOVED it.  Great job.  I particularly liked their thoughts about ensemble playing, phrasing, tone, and how each new bassist came to understand the groove of Jaimoe and Butch as a singular thing.  Just great.

This is TJ Klay from Nashville Tennessee. I am a harmonica player /singer-songwriter by trade and am in a band with both Reese Wynans and Richard Price. Richard will talk “Duane” all day long with you if you let him. I’ve tried to be more respectful with Reese and not ask too many questions and let him talk about it when he wishes to.

When I started playing the harmonica, I used Duane’s slide playing as a blueprint and he has probably influenced me more than any other musician to date.

I want you to know how good I thought One Way Out was. I discovered the ABB as a junior in high school & have never been without Live at the Fillmore since. Had the vinyl, had the eight track,  the cassette, CD, remastered CD, CD of alternate takes… you get the picture.

It was brilliant to have the story told by those who were there and you did a excellent job compiling it and doing what needed to be done with that information. I found myself being really sad nearing the end of the book, knowing that I could never read another book about them as good as this.

… I just wanted to know I love the book and just how special it was for somebody like to read, only to find there was a lot more exciting stuff that had never been covered before!

Just want to say thanks for “One Way Out” – a great read. I first heard of the ABB when their first album was released and played on air by a progressive jock in NYC. The love affair has continued now for 45 years even though the first 4 albums – the Duane years – cannot be matched. In any event, the book was masterful and you deserve tons of credit for having taken on such a daunting task. I hated finishing the book, but I guess the road doesn’t really go on forever.

Col. Bruce Hampton and the ARU: An Appreciation
0 replies