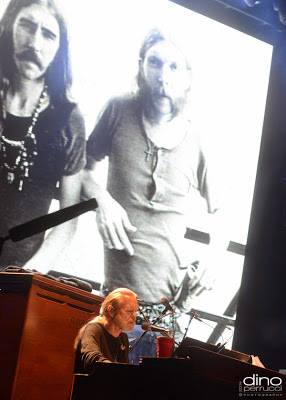 Finally, some news we’ve been waiting for… tickets for the final Allman Brothers concerts go on sale next week… Please note that the information below is a press release from the band without any editorial input or commentary from me… and also note that there is a presale for members of the band’s Peach Corps fan club.. if that’s you, go find that info!

The ALLMAN BROTHERS BAND have announced the on-sale information for the final shows for the Rock & Roll Hall of Fame group that formed in 1969. Tickets for their October 27 and 28 performances at New York City’s Beacon Theatre will go on sale to the public Friday, July 11 at 10:00 AM Eastern. These final ABBperformances bring the band full circle back to the Beacon, a venue the band has played exactly 232 times since their annual tradition began there in 1989.

This comes after the news that the band rescheduled dates for four shows at theBeacon Theatre that were postponed in March: Tuesday, 10/21, Wednesday 10/22, Friday, 10/24 and Saturday, 10/25. Tickets purchased for those sold-out shows (originally set for 3/25, 26, 28 & 29) will be honored on these dates for the corresponding days (see itinerary below). Fans unable to attend the rescheduled shows can return tickets for a refund at the point of purchase prior to August 1.

As part of the 45th anniversary celebration, the band recently released a new DVD 40, filmed at the Beacon on their 40th anniversary, where they performed their first two albums The Allman Brothers Band and Idlewild South in their entirety. Their monumental breakthrough live album At Filmore East (cited by Rolling Stone on their list of 25 Best Live Albums) will be celebrated by Universal Records with the July 29 release of a six-CD set.

The current lineup of the band–founding members GREGG ALLMAN (vocals and keyboards), BUTCH TRUCKS (drums and tympani) and JAIMOE (drums) plus longtime members WARREN HAYNES (vocals, lead and slide guitar), DEREK TRUCKS (slide and lead guitar), OTEIL BURBRIDGE (bass) and MARC QUINONES (congas and percussion)–is, at 14 years, substantially longer than any other version of the band.

Tickets for the October 27 & 28 Beacon Theatre shows go on sale to the publicFriday, July 11 at 10AM ET and can be purchased at www.ticketmaster.com andwww.beacontheatre.com and via charge by phone at 866-858-0008.   If tickets remain, they will also be available at the venue box office beginning Saturday, July 12 at 11:00AM. American Express® Card Members can purchase tickets before the general public beginning Tuesday, July 8 at 10AM ET throughThursday, July 10 at 10PM ET.

Here is the band’s final itinerary:

From the archives: Derek Trucks, Family Man
Scroll to top