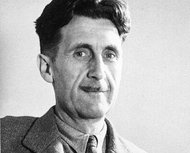 New York Times reporter David Streitfield has been covering the Amazon/Hachette dispute since it began. He has an interesting, humorous take on the latest development – a rather odd and clearly misguided George Orwell reference. Money quote:

The retailer argues that people against e-books are against the future, and talks about how the book industry hated cheap paperbacks when they were introduced in the 1930s, and said they would ruin the business when they really rejuvenated it. Unfortunately, to clinch its argument it cites the wrong authority:

“The famous author George Orwell came out publicly and said about the new paperback format, if ‘publishers had any sense, they would combine against them and suppress them.’ Yes, George Orwell was suggesting collusion.”

Could the Amazon Books Team, which is credited as the source of this post, have really written this? Because a moment’s Googling would have revealed that the team is misrepresenting this “famous author.”

I’m sure some of you saw it. You probably have not seen what follows… the full letter from Amazon, which I received as a self-published author (One Way Out began as an Ebook.) I thought it would be of interest to some. Writer Bob Lefsetz also has an interesting take on the issue – check it out here.

An interview with John Fogerty
Scroll to top