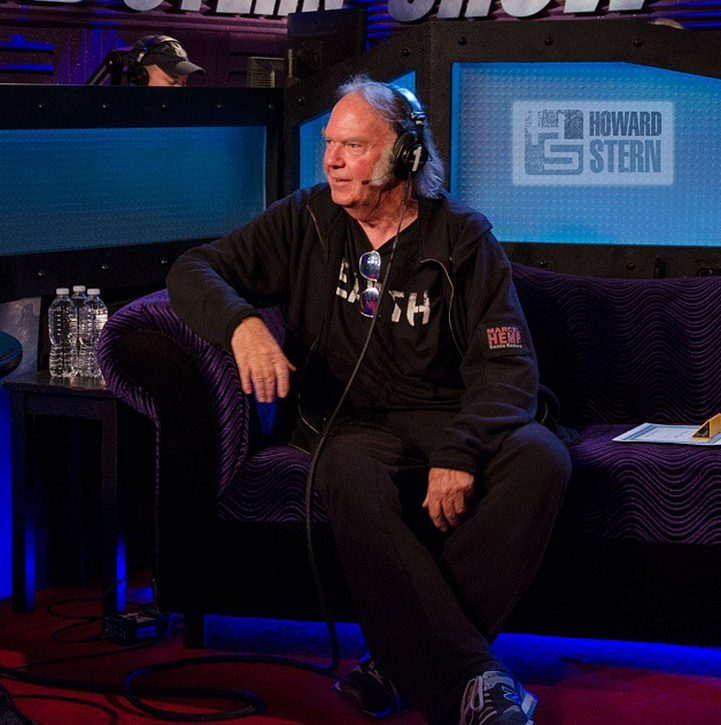 Neil Young visited Howard Stern for an interview this morning. They covered a lot of ground, including why he thinks Buffalo Springfield’s music didn’t translate well to record, the act and art of songwriting, bad reviews, and Crosby, Stills, Nash and Young. Young doesn’t even want to mention David Crosby by name. When Stern asks if it would break his spirit to tour with CSNY again, Young replies, “It would never happen, so it’s nothing to worry about… Why get together to celebrate how great we were?

…”When you play music, you have to come from a certain place and everything has to be clear. I don’t want to disturb that. The love has to be there.”

Amazingly, it is also revealed that he can’t tune a guitar. NEIL YOUNG CAN NOT TUNE A FUCKIN’ GUITAR. That’s crazy.

Listen to the entire 75-minute interview below.

Commentary on this from Bob Lefsetz:

We’ve been told that selling out is a choice. But the truth is Neil Young is just wired different. You can’t emulate him, because you’re not him.

This interview was very slow to get going. Because Neil was reluctant. And he was mimicking his hero Bob Dylan, refusing to explain his songs and obfuscating in interviews. But then Neil started revealing his choices and they were so different from everybody else’s that you couldn’t help but marvel.

Like being pissed at the cameramen at Woodstock, to the point of yelling for him to get off the stage, the result being Neil’s absence from the movie. But he didn’t care.

And this is fascinating, because dedicated Stern listeners know that Leslie West believes his career cratered as a result of not being in the flick, that his manager’s decision for Mountain not to be in the movie hurt him forevermore.

But then there was the refusal to be on the “Tonight Show” with Buffalo Springfield because it wasn’t their audience. Can you imagine that today? Someone refusing to do press because the audience might not be right? Ever since the Police the goal is world domination, and if you’re not interested, I’m gonna beat you over the head and convince you.

And then the refusal to get back together with CS&N. Sure, he’s got a feud with Crosby, but even more interesting was the lack of motivation. Howard talked about the fans, Neil didn’t care about the fans, he cared about the music, to go play the greatest hits so people could hear them and everybody could make money held no interest.

And then Neil unloaded on AGT. He repeated it a few times, wondered why Howard Stern did the show.

And that’s when the gap was fully evident. Neil Young was refusing to play the game. He wasn’t gonna come on and reveal all his warts and make like they’re all friends just to sell his latest forgettable product.

And let’s be clear, that is why he was on, to flog Pono and his book and his album, which is kind of sad, I’d be more impressed if Neil dropped by with nothing to sell, but in these moments the divide between broadcaster and talent, between talker and singer, between performer and artist, could not have been more evident. Neil Young was gonna be himself, he could only be himself, and it made Howard and his show look small.

That’s how it used to be, when musicians were giants who walked the earth towering over all other media. Before the best and the brightest went into tech and all we got was an endless parade of yes people willing to bend over to get reamed by not only the industry but the corporations. Who can believe in people like that?

And sure, there was some detailing of how the songs came together, but to say this interview was great would be to overestimate it. At the end it finally flew, Neil relaxed, didn’t deny he was dating Daryl Hannah, said he loved to paddle board, but this was not a morning in the clubhouse so much as a glimpse into the mind of an artist.

Who lives in his own head and doesn’t follow the charts and has no idea of this popular culture of which you speak because he’s doing his own thing.

And I don’t agree with all of Neil’s choices, nor do I think much of his recent material is genius. Then again, even he thinks he’s repeating himself.

But you don’t often get a chance to peek into the brain of an original artist who impacted the culture and is still here, with his faculties intact, not retired, but continuing to push the envelope.

I implore everybody making music to listen to this interview. Not because it’s great, because, as I stated above, it’s not, but because it illustrates you’ve got choices.

You don’t have to write hits.

You don’t have to listen to your label.

Your manager’s job is to free you up, to respect your wishes, to allow you time to create.

We’re so far from the garden I doubt we can ever get back.

There will always be music.

But that does not mean it will be art.

Art requires artists. Who question. Who take chances. Who hew to the vibrations of their own inner tuning fork, who we pay attention to because of their strength in following their vision, in continuing to search without compromise.

Whew. It was definitely Neil.