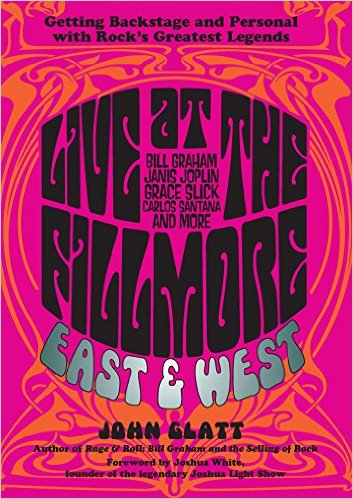 Bob Lefsetz writes a music industry newsletter I find consistently interesting and enlightening. I recommend subscribing and checking out his archives here.

He reviewed a new book about the Fillmores. I have not read it yet, but am going to buy based on his review, which I present to you here.

“Live at the Fillmore East and West: Getting Backstage and Personal with Rock’s Greatest Legends”: http://amzn.to/1IXOc7q

What people don’t understand is classic rock was a revolution, populated by the disenfranchised, hungry to have fun and make a difference. To think that these degenerates could conquer the world and lead a nation was anathema to the powers-that-be, the same way they were confounded by the nerds who took over the world with tech in the twenty first century.

Janis Joplin was an outcast looking for acceptance who never got it until she demonstrated her greatness and made it. Then it killed her.

Carlos Santana was a street urchin from Tijuana who would still be an unknown if it weren’t for Bill Graham.

Grace Wing was a rich girl’s daughter, who thrived on the privilege and then deemed it necessary to test limits, whiplashing her band and the entire nation in the process.

And we ate it all up. We went to the Fillmore and then Woodstock. Money started to rain. And then cocaine flew up everybody’s noses and the entire scene matured and has never been the same.

I don’t expect anyone under thirty to read this book. Because they believe that they’re in charge and the world is their oyster. But in the fifties and early sixties this was not the case. Kids were subservient. The old white men ruled. You were afraid of your mom and dad, they weren’t your best friends.  And then we heard the music.

It didn’t start in the suburbs. There was no internet, never mind cable TV. If you didn’t live in the metropolis, if you weren’t within earshot of the city airwaves, you were out of the loop, a year or two behind. By time the band was on Ed Sullivan there was a whole new crop of acts the cognoscenti were into. But you didn’t know them. There was no social media, the newspaper was everything, and even if the newspaper reported, young people did not read it, it was for the oldsters.

And then came the radio.

This book barely focuses on the recording side of the equation, which has been lauded ad infinitum. This is all about the gig, the live performance, where most of these acts made their bones. The Beatles started live, as did Joplin, Santana, the Jefferson Airplane and the Dead, all of whose careers are profiled herein. They were outsider musicians, back when you could survive on a few dollars a week, when life was about opportunities instead of closed doors.

There are so many inaccuracies and misspellings in this book you’ll be horrified.

But you’ll also learn inside details you never knew.

Bill Graham was making the lion’s share of the dough, but he built the scene, there were no concomitant promoters to compete with him until the acts could sell themselves. Which is how they ended up with ninety percent of the gross. You can count the number of people in attendance, you cannot count how many records have been shipped, stolen or bought. The record company kept that info private, and still does. But the rubber meets the road at the gig. And that’s where the fire is lit. All these acts made it based on their performances, most significantly at Woodstock.

You’ve got no idea how big the movie and attendant triple album were. Sure, the Beatles may have conquered America, but they were safe, Brian Epstein cleaned them up. No one cleaned up Janis Joplin or Grace Slick or Carlos Santana. And when you saw them perform you wanted so much more.

And they didn’t give a fuck. Sure, they liked the money. But they could offend the audience, they were on their own trip. And it was so different from today.

I wasn’t planning on reading this book. But going through a pile of what was sent to me I uncovered it and got hooked. Every night I couldn’t put it down. I went down the rabbit hole to what once was and will never be again.

You see the scene was nascent, no one knew what was happening, and then the worm turned and it hasn’t been the same since. Kinda like the web was for exploration, before pop-up ads and all kinds of shenanigans made it lucrative for the usual suspects. If you were surfing in 1995 you remember the naked women tracking their every move, the people detailing their lives, it wasn’t about money so much as self-fulfillment and exhibitionism.

And there’s a healthy dose of exhibitionism in rock and roll.

But you cannot become one of the richest people in the world. To do that, you had to play music in the sixties and seventies. When fans gave the acts all their dough. Because without music life was empty. Hit singles counted, but where you were going was more important than staying still.

Albert Grossman tried to get Janis Joplin clean. Bill Graham did a great job of managing the Airplane. But the musicians didn’t want to listen. They wanted to be free, to their detriment, Paul Kantner admits this.

But it was this specific middle finger to the powers-that-be, to the establishment, that made them so attractive.

Don Henley was right, we haven’t had that spirit here since 1969.

But if you want to know what it was like, read this book.

Oteil on One Way Out
0 replies