The mighty Ween is returning from several years of breakup with three shows this weekend in Bromfield, Colorado. They are promising one massive 94-song set with no repeats = plus fan requests. I know they are an acquired taste and many friends who I’ve turned on to them look at me blankly. But if oyu get it, you get it, and oyu love it. They are a GREAT live band and I am very happy they are playing together again. In honor and tribute, I reprint my 2000 Guitar World profile. 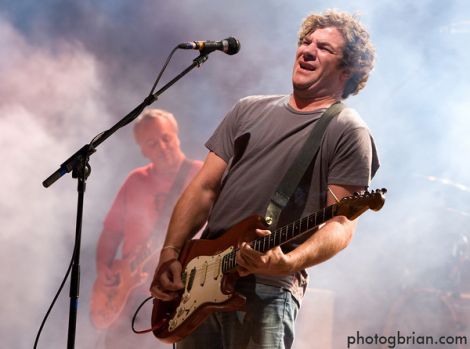 “Dude, are you ready for some Whiffle?”

Mickey Melchiondo, a.k.a. Dean Ween, turns the steering wheel a hard left and his black Suburban veers off the blacktop and onto a bumpy dirt road that cuts through head-high cornfields.

We ramble down the road, Willie Nelson blasting from the tape deck, faithful mutt Jim breathing hard in the back seat. Suddenly, the fields give way to an ancient, crumbling farmhouse, behind which sits a Whiffle Ball field cut out of the weeds, complete with chalked lines. Seven or eight bare-chested slacker dudes stand around sipping beers and playing a somewhat dispirited game of Whiffle Ball. Dispirited, that is, until we arrive.

I have journeyed here, to the quaint burg of New Hope, PA, and to this makeshift ballfield, to gain insight into one of the under-appreciated geniuses of modern guitar. Dean Ween and his partner in crime, Aaron Freeman—a.k.a. Gene Ween—have been hard at work on White Pepper, Ween’s seventh studio album. On the eve of the album’s release, I’ve come looking for answers to the wonderful weirdness that is at the heart of Ween’s 11-year career.

But first, there is the matter of Whiffle Ball.

Mickey quickly takes command of one team and dispatches me to the other. Someone emerges with more beers, and the game resumes with a new vigor, Mickey hitting homeruns into the deep weeds in left center field. As the sky turns dark, cars are turned around and left running, the shining headlights allowing us to eke out 30 bonus minutes of play, as Funkadelic blasts the perfect soundtrack to a sweetly dragging summer evening.

The game over, Dean and I clamber back into the Suburban and head into town for burgers and more beers. I am beginning to understand much about Ween’s world. No matter how ironic their songs can be, the guys behind them are about as straight-forward as it gets. Casual listeners may imagine two guys sitting around, pen in hand, asking one another what rhymes with mucus, but the truth is far more organic.

Ween was born in 1984 when Melchiondo and Aaron Freeman sat next to each other in seventh grade typing class. “The very first day we met, we typed up the names of the songs on our first album,” recalls Freeman, aka Gene Ween. “Then we went over to Mickey’s house and wrote them.”

The songs were rudimentary to say the least. 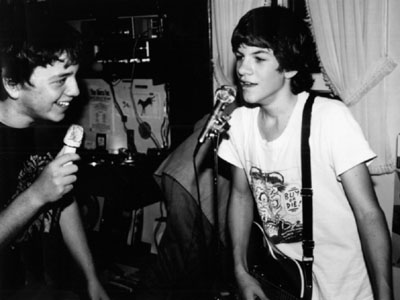 “I could barely play guitar and Aaron didn’t play at all,” says Melchiondo. “But I had a tape deck and a drum machine and a guitar. I tuned to an open chord and just moved my thumb up and down the neck and we screamed lyrics.”

The 14-year-old Melchiondo was a punk purist and in honor of the Ramones, he felt that any self-respecting band should share a single surname, so he and Freeman dubbed themselves Dean and Gene Ween. Soon, they were spending all their free time together, creating an entire alternate universe centered around their deity, Boognish. Obviously, as they grew older, their tastes changed, their musical ability grew and Ween’s music evolved, but to this day it retains the DIY, low-tech purity of two buds sitting around screaming into a tape deck.

“I was totally into punk and Aaron turned me on to some new wave stuff, then I fell in love with Devo and that turned my head as to what you could do with music,” says Melchiondo. “But my tastes really changed when I got into classic rock as a teenager. Then I started smoking more weed and spent the rest of high school in my room playing along to Hendrix and Zeppelin records.

“I still try to keep my guitar playing as cheap and tasty as possible. Jimmy Page is the best example of cheap but tasty guitar playing. This is the best way to explain it — Jeff Beck is technically a much better player but I listen to Page and all his mistakes 1,000 times more. Beck is one of four or five masters of the instrument and unless you’re one of them, songwriting has to be the key to the equation. To me, Hendrix is the only guy who bridged it by having it all – totally tasty but nothing cheap about him.”

The day after graduating high school, Aaron and Mickey moved into an apartment they called The Pod and spent virtually every waking hour not working their day jobs (Mickey pumped gas; Aaron was a short order cook at Taco Loco) writing and recording songs. “We would get a single gig and I’d spend a month obsessing over every little detail of it,” Melchiondo recalls.

Someone from Twin Tone Records heard Ween play at a house party in Maplewood, New Jersey, in 1989, signed them and released God Ween Satan Oneness the following year. Recorded in producer Andrew Weiss’s living room, Ween’s debut was a double album, its 23 songs a brilliant testimony to fevered creativity and an almost subliminal ability to pen then bury supremely memorable melodies. The following year they released The Pod, an evil and eerie sounding album on Shimmy Disc records.

At that point, Ween had a growing underground following, and was still touring as a duo backed solely by a tape deck and their own delusions of grandeur. Much to everyone’s surprise, Elektra Records signed the band and released Pure Guava, which is, if anything, even goofier than its predecessors. By the time of 1994’s Chocolate & Cheesee, their first album recorded in a real studio, they had put together a hard-hitting rhythm section. Largely dispensing the cut and paste approach of previous efforts, the album, dedicated to the late comedy giant John Candy, took the wraps off Ween’s melodic brilliance without abandoning their skewed worldview. 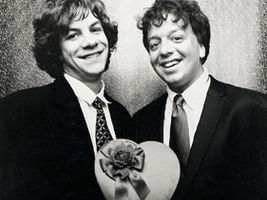 Melchiondo has developed into a violently inspirational guitarist and Freeman, who is also a fine player, can, as they say, sing his ass off. Their live shows have evolved into lengthy, high-energy affairs which leave both performers and audience drained. They rock out with enough energy and enthusiasm to turn most “jam bands” purple with envy. Still, a lot of people mistake Ween for a joke band, a sort of alt-rock Weird Al. Though this annoys Melchiondo and Freeman, they can only get so upset. They have, after all, appeared in animated form on South Park and cut tunes like “Waving My Dick In The Wind,” “Don’t Shit Where You Eat” and “Help Me Scrape the Mucus Off My Brain.” But something can be funny without being a joke, a point which Freeman and Melchiondo think most people overlook.

“Just because we have humor in our music, a lot of people think we’re a joke,” says Freeman. “But what we do is not contrived — it’s stream of consciousness. We write from experience, about things that happen to us.”

When I suggest that this is not completely true, Freeman persists. I mention Chocolate & Cheese’s “Mister, Won’t You Please Help My Pony” and point out that they never had a pet pony dying behind a tree, causing them to beg a passer-by for aid. “That never happened to you,” I note.

“But it did,” Freeman insists. “We were on tour in Seattle, tripping really hard on mushrooms, and Mickey was in bed and he just kept saying over and over, ‘Mister, won’t you please help my pony.’ I wrote it down and thought, ‘That’s a song.’”

Well, okay. Anyhow, the point is clear: Ween is a spontaneous band and they’ve been winging it ever since they typed up the titles to their first “album,” with an ever greater musical ability allowing them to pull off more and more of what they hear in their heads. Still, they retain their initial enthusiasm – the same unjaded spirit that makes them ideal Whiffle Ball mates. Hours after our ball game, we return to Mickey’s house and he takes out a drum machine, a ukelele, a battered Strat and a mini Marshall and we have a jam session that is brief, intense, goofy and totally fun.

Later, as we sip the evening’s final beer and watch a tape of Ween on South Park, Melchiondo snickers at the career he’s managed to forge. “Obviously, when we formed this band in seventh grade we never had any dreams of it being a career move,” he says. “We just loved doing it. It brought us more satisfaction than anything did, and it still does. It’s my hobby and my career at the same time. That is probably somewhat dangerous for my sanity, but I think it’s what makes it good, too.”

If you enjoyed this, please check out: