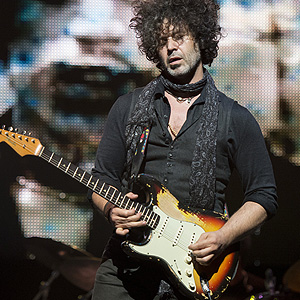 “This feels monumental to me,” says Doyle Bramhall II, about Rich Man, his first album since 2002’s Smokestack. “I spent a year and half recording it and 16 years gathering inspiration and influences.”

Since his last release, Bramhall has worked on stage or in the studio with the Tedeschi Trucks Band, Sheryl Crow, Roger Waters, Gary Clark Jr., Gregg Allman, Questlove, and B.B. King, as well as Eric Clapton, whose band he has anchored since 2000. The wide range is reflected on Rich Man, which finds him standing at the crossroads of blues and rock that he has explored throughout his career, on his own and with The Arc Angels, while also adding large doses of r&b and traces of various world musics.

“I’m like a musical hunter gatherer,” says Bramhall. “Every experience I have, every artist I work with, becomes a fragment of my journey. I’m always learning craftsmanship and artistry and striving to find an ever deeper, higher connection to music. That’s why I listen to a lot of classical, jazz, Arabic, Indian, Moroccan and Sufi music – the highest forms of pure music without any idea of a marketplace.”

Rich Man ends with a cover of Jimi Hendrix’s “Hear My Train A Coming,” which Bramhall, whose father Doyle was Stevie Ray Vaughan’s lifelong friend, musical inspiration and songwriting partner, says he never intended to use. “We just played that live in the studio, and when I sequenced the songs, I felt that they told a complete story and ‘Hear My Train’ brought it full circle, to the beginning of things – the blues.”

Throughout the album, Bramhall tried to bring to his own work the same looseness he helps others achieve as a producer. He notes that it’s often easier to let go when working with others, where he finds his ideas flowing freely.

“On my own music, I tend to get more caught up in trying to make a song exactly how I envisioned it when I wrote it,” he says. “With this album I was able to let go and allow the music to find itself.”