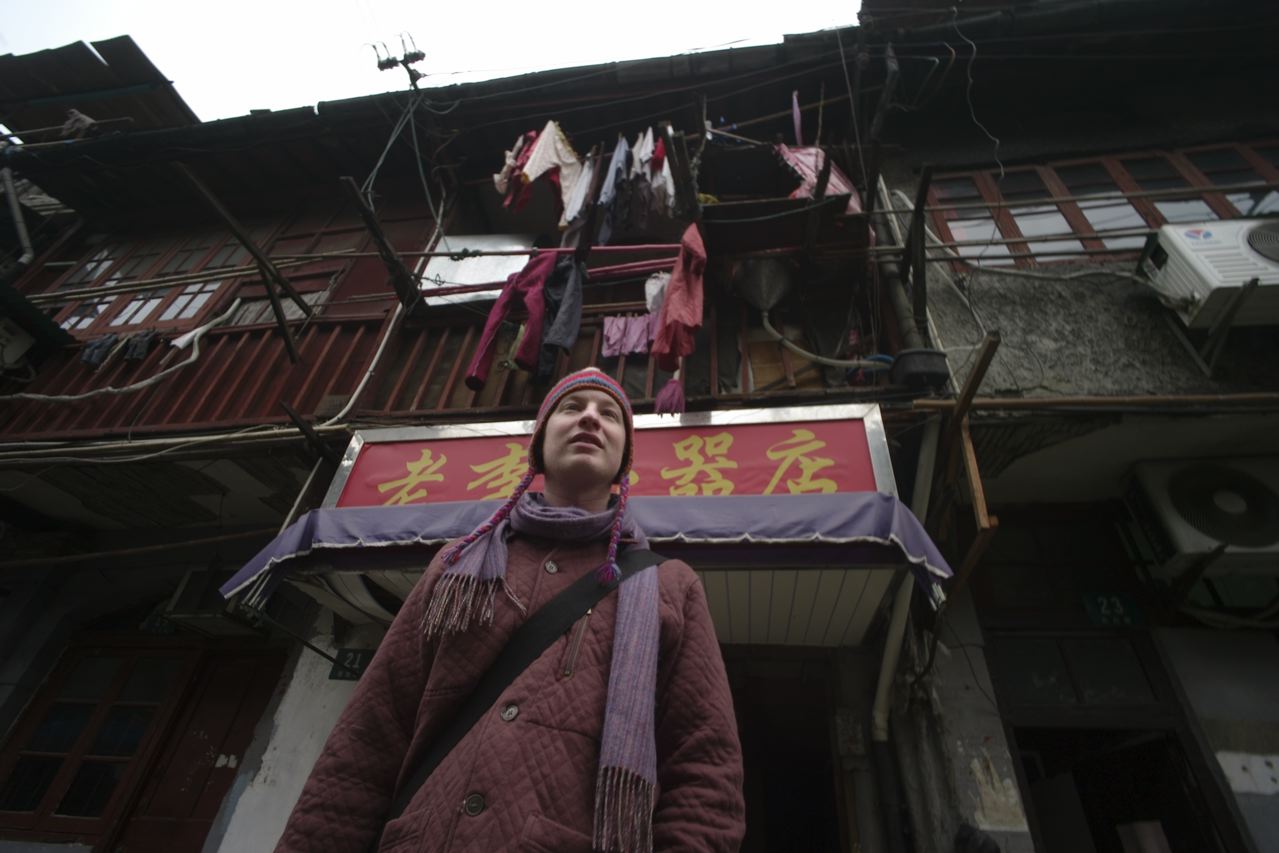 In honor of the release of Eric Clapton’s new double-CD Live In San Diego (with Special Guest JJ Cale), I present the following article, which I wrote for Guitar World. Hanging out with Derek and Doyle in Shanghai was so much fun, as you can well imagine.

The show itself was spectacular and it actually inspired me to start what became Woodie Alan when I returned to Beijing – so a very monumental weekend for me. The tracks with Cale are getting the attention and deservedly so, but I’m thrilled that this edition of the Clapton band has a performance captured for well-mixed, official release.

Derek Trucks stands in the middle of a narrow Shanghai street, camera pressed to his eye. He is aiming his lens towards a group of Chinese men and women off to the side, behind the stalls, engaged in a game of mahjong, while several kids play on the ground around their feet. Doyle Bramhall II is a few feet back, eying a stall filled with antique radios, watches and phonographs, a huge camera dangling around his neck.

In a few hours, the two guitarists will climb onto Shanghai’s Grand Stage, joining Eric Clapton as the music legend makes his Chinese debut. It is their latest stop on a year-long world tour, which kicked off last May and has taken them through Europe, North America, Asia, Australia and New Zealand. Trucks and Bramhall have had plenty of chances to get out and see the sites, capturing it all with their high-end Leica cameras. 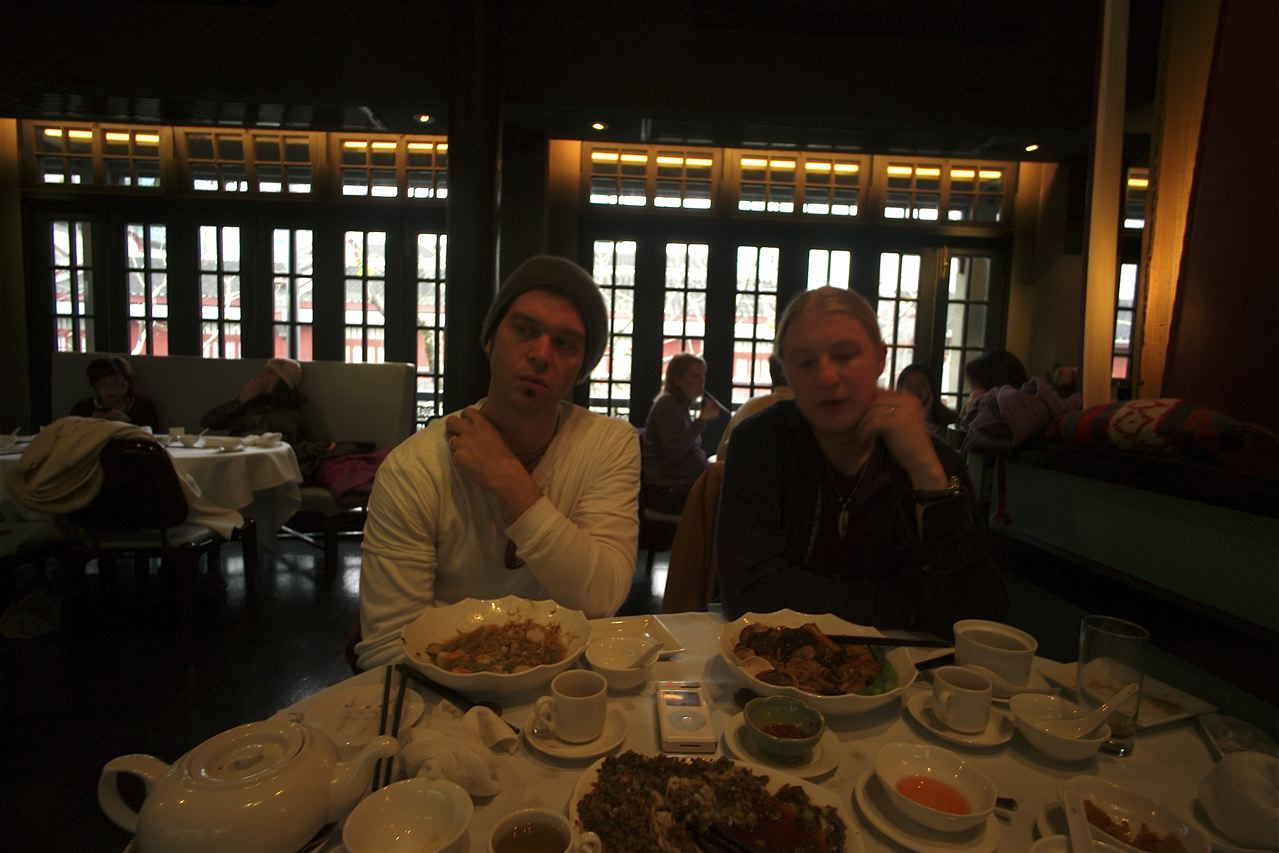 Bramhall has had a longtime interesting in photography (as the photos accompanying this story attest),  but Trucks has only recently caught the bug. Shutterbug Clapton took his young protégé to a Leica store in Germany and fairly demanded he make a purchase.

“I figure with the amount of things we were seeing on this tour, it would be good to have a nice camera to document a year in the life of the Eric Clapton band,” says Trucks. “It’s all been pretty amazing.”

Even the unflappable Trucks is impressed with this gig. Now 27, he’s been gigging since he was 11, fronting his own band since he was 15, a member of the Allman Brothers Band since he was 20. But touring the world with a certified rock superstar is different. They fly around Asia first class and jet around Europe and North America on a private plane, staying in five-star hotels everywhere. With Trucks’ future collaborations with Clapton up in the air, you might think he would have a hard time leaving this life behind. You would be wrong.

“Filling up my passport excites me,” says Trucks, over a lunch of soup dumplings and fried noodles in a restaurant near the market. “But touring with three bands on three completely different levels at the same time has made me realize just how much it’s all the same. The hotel may be different but you deal with the same bullshit and you get the same payoff – going on stage and playing music for people.”

Trucks left the Clapton tour with 12 dates to go join the Allmans’ annual run at New York Beacon’s Theatre. This summer, he will focus on touring with the ABB and his own band, who have largely been waiting for him to return from the Clapton jaunts. He first joined up with Clapton in the studio for Road to Escondido, the guitarist’s collaboration with JJ Cale, on the recommendation of Bramhall, who has worked with Clapton since 2000. 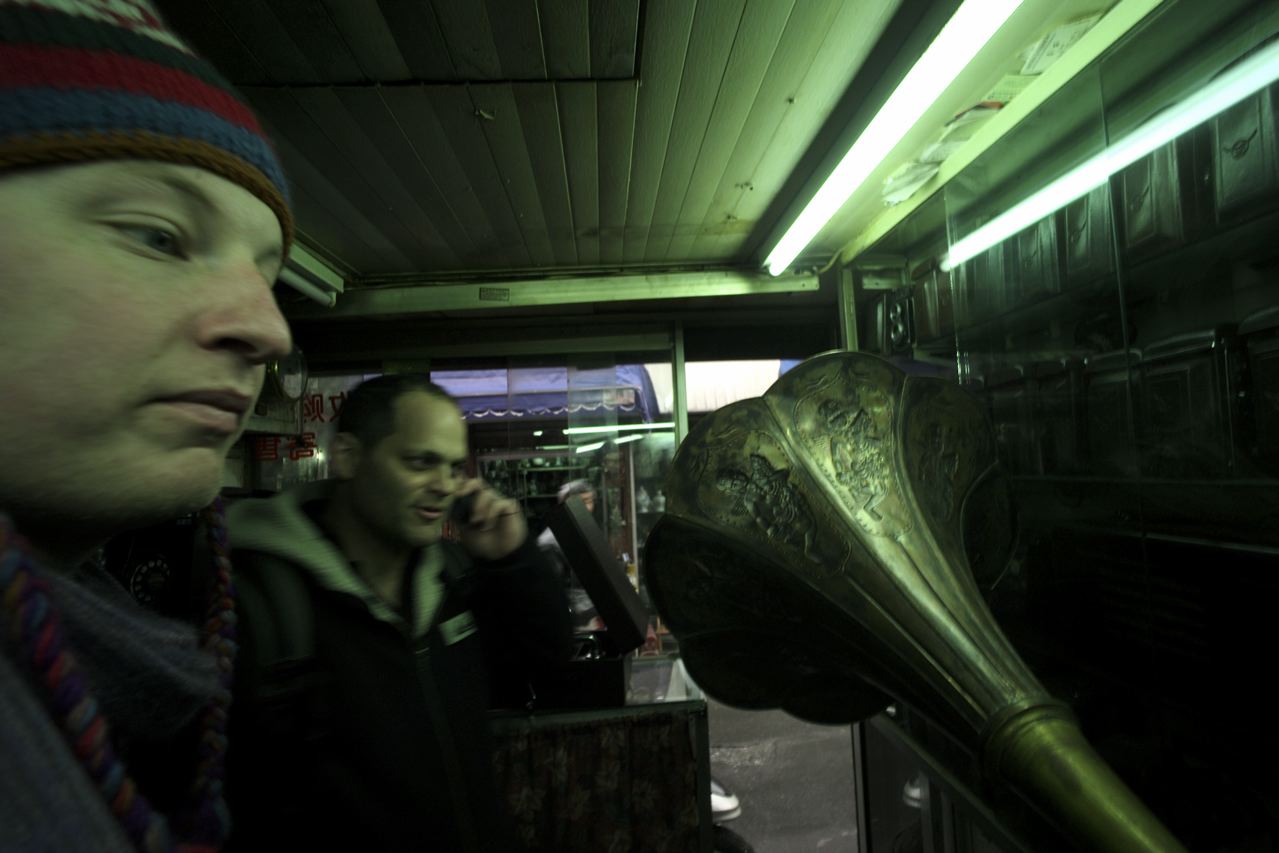 “Eric said he wanted a third guitar player, which I thought was unnecessary,” recalls Bramhall. “He explained that he wanted to put together a band to play some different music, including a lot of Derek and the Dominos. There are a lot of guitar parts on that album and he felt he hadn’t really been able to play the material correctly all these years. I really thought Derek was the only guy who could do justice to that spot.”

Clapton’s also hired a new rhythm section, drummer Steve Jordan and bassist Willie Weeks, who form a hard-hitting, dynamic core. The band pushes Clapton hard, unlike many of his previous groups, whose prime function seemed to be setting an unthreatening musical bed upon which Clapton could lay his guitar and vocals. The current group feels very much like a real band, with give and take, pushing and prodding.

In Shanghai, they came out and launched into five straight Derek and the Dominos songs, including an extended, gorgeous take on Jim Hendrix’s “Little Wing” that spotlighted all three guitarists. Clapton, on top of his game, relentlessly drove the group from one song to another, with propulsive and energetic rhythm and lead playing. He barely spoke, which was confusing to Asian crowds used to much more pandering and interaction from its performers.

“Eric is turning his back to the audience much more than he has in the past,” notes Bramhall. “It is not out of indifference but because he wants to hear everything the band is doing and really interact with everyone. He’s feeling it. He’s in a zone.” 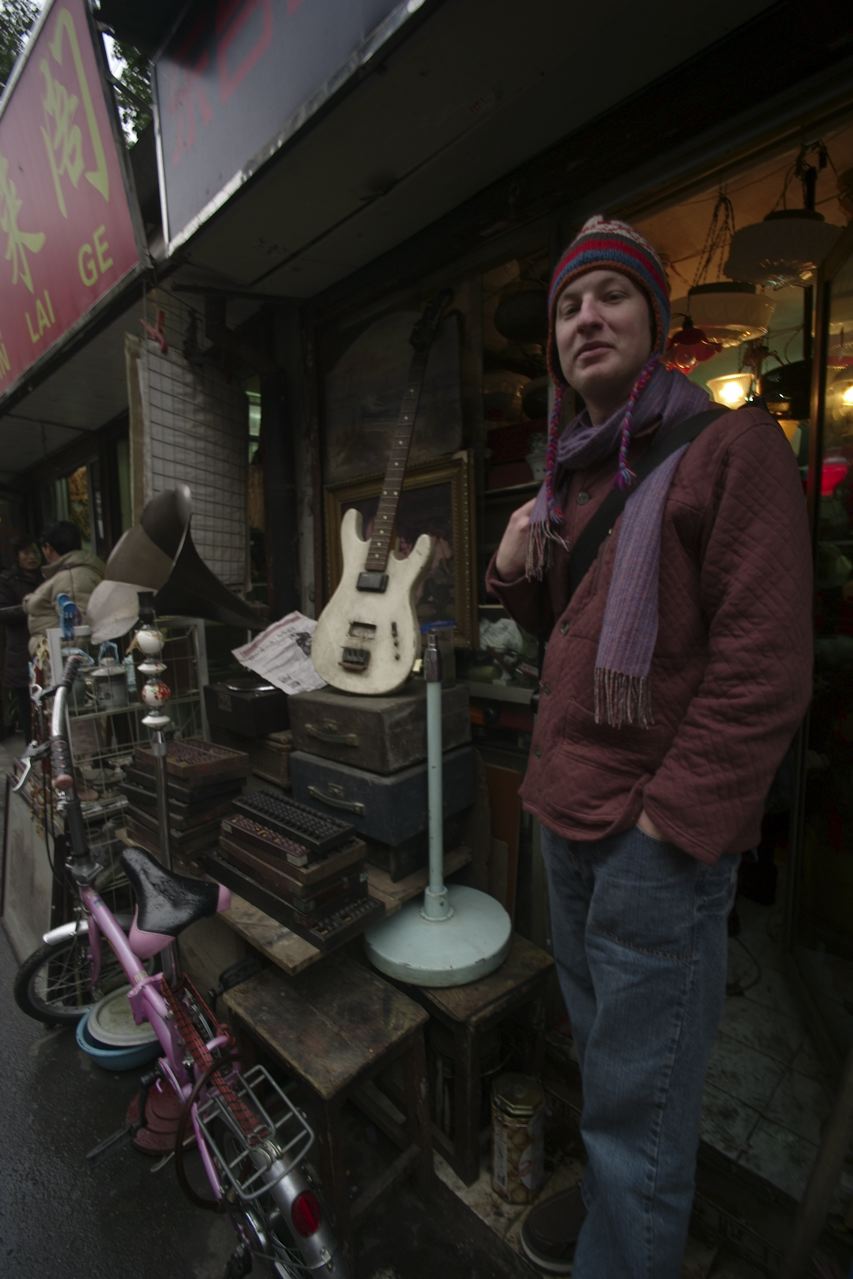 The song selection was heavenly for us guitar freaks, but it left much of the crowd perplexed. Many would have preferred to hear “I Shot the Sheriff” or “Pretending,” hit songs that have been dropped as the tour progressed. The crowd finally surged to its feet when the band closed with a stirring “Layla,” more similar to the original version than anything Clapton has played in years. Trucks replicated Duane Allman’s soaring slide lines while Bramhall held down the rhythm and fills, freeing Clapton to focus on leads. The night ended with an encore of “Crossroads,” that also drew a wild response.

“Eric had never been to China before and he hasn’t hit some of the other places in 10-15 years,” Trucks says. “Those people expect to hear hits and they may well not know any of his music except [the greatest hits collection] Timepieces or Unplugged. They respond much more to any song on either of those albums.”

Adds Bramhall, “It seemed like most of Asia pretty much sat on their hands the whole show.”

Trucks notes that he was surprised to find similarly seated and mellow crowds through much of Europe. “Playing all these places has given me a new appreciation for American crowds,” he says. “It’s really the best place to play this type of music in terms of feedback and feeling the crowd is with you from the very first moment, which really helps you give a little more.”

After the show. Bramhall and Trucks headed out for a night on the town of one of the world’s most pulsing cities. They first hit a tiny music club. Expecting a quiet scene, they walked into a small, cramped room packed with young Chinese fans who had attended the show and greeted them with a standing ovation and flashing cameras. The excited Chinese band launched into “Sweet Home Alabama” followed by a steady stream of Stevie Ray Vaughan, Clapton and Allman Brothers songs.

The two guitarists signed autographs for virtually every person in the place. Overwhelmed, they left after about 20 minutes and found a cozy little club where a flaming lounge singer named Coco performed Chinese torch tunes. Trucks proclaimed it the best music he’s discovered on the road, before pushing down the street to the Cotton Club, where a blues band played. The scene was mellow, the group thrilled to welcome the young guitarists to their stage, where each played a song. It was almost sunrise when they crawled into a cab to take them back to the Four Seasons hotel.

Trucks and Bramhall were tired but feeling good, happy to have once again busted out of the grind to explore their surroundings and secure in the knowledge that they had an off day before flying to Seoul, Korea.

“I spent a lot more time sitting in my hotel room the last time I toured with Eric,” Bramhall recalled. “Then we added this young slide guitarist who likes to go out and see and do everything. It’s been fun.”

Trucks laughs and shrugs. “I want to see it all,” he says. “Who knows when an opportunity like this will present itself again.”

Back in China for a Woodie Alan reunion!

Duane Allman’s 1957 Les Paul goldtop is at the Beacon. The story…
0 replies