I completely forgot about this. In 1998, I somehow got Trey Anastasio to do a little ol’ Guitar World Inquirer, around the release of Phish’s The Story of the Ghost. Enjoy.

Who or what inspired you to play guitar?
If I was honest, I’d have to say Zeppelin 1, which I was obsessed with in eighth grade. I was already playing drums, and that was the album that made me want to switch because if you’re sitting behind the drum kit you can’t wear those cool dragon pants.

What was the first song you mastered?
I really only started playing guitar very shortly before Phish started and I was actually trying to learn solos before chords, starting with some of the Steely Dan songs. I think “Kid Charlemagne” was first and it was really hard. I got it some degree and then I learned “Reelin in the Years” and tried to learn the Allman Brothers’ “In Memory of Elizabeth Reed.”

Who is your guitar hero?
Jimi Hendrix is obviously the ultimate guitar hero, mine and everyone else’s. He is without question the greatest electric guitarist who ever lived. He’s the Michael Jordan of guitar, and almost of music, really. I have tons of Hendrix bootlegs and am still obsessed with him. I have other heroes: Jerry Garcia, Frank Zappa and lots more. But Jimi had it all. How could you pick anyone else?

Is there any one gig you consider your best?
Well, I’m pretty self-critical so while I’m sure that there’s lots of live stuff that was probably really good, there’s also a lot of really bad stuff. I like some of the stuff on the live album [A Live One] and I like “Billy Breathes” and “Prince Caspian” and the solo on ”Taste,” from Billy Breathes, but I like The Story of the Ghost more. It’s just too fresh to analyze.

How about your worst gig?
We played in France, where we are totally unknown, in between Santana and Noah, an Israeli folk singer who is very popular there and got three encores. I had a really bad feeling as we walked on stage and within two minutes after we started playing the audience started whistling really loud — which is how they boo. We probably should have accepted that we had been booed off stage and walked off, but we didn’t. We went into this huge jam and in the middle of it, the whistling just went nuts. It was pretty wild We managed to play about four songs before we succumbed and walked off stage. Oddly, it was kind of one of the greatest moments in my life because it was so intense and weird standing there with all this energy raining down on us. We had rehearsed with Noah and we were going to do this whole thing with her and her manager was standing on stage screaming at her not to do it. We were trying to figure out what to say but we were afraid to say anything, though we thought of all sorts of funny things, like, “All you’re good for is your fries and your kiss” and ”This place would be Germany if it wasn’t for us.” All kinds of horrible stuff, which if we had uttered we would probably have all been killed.

What is the one piece of gear you couldn’t live without?
My custom Languedoc guitar. On previous records, I’ve used several other instruments, but on The Story of the Ghost, I didn’t use anything else, and on stage it’s exclusively the Languedoc. The guitar is just perfect for me and has everything I could ever need or want in an instrument.

Any advice for young guitarists?
Don’t eat at McDonald’s. 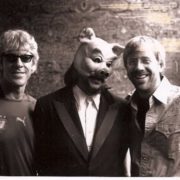