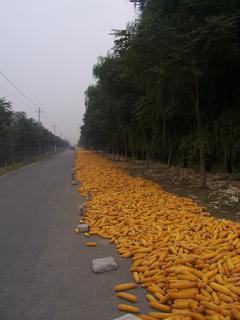 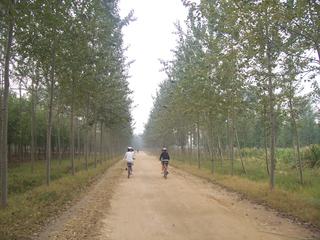 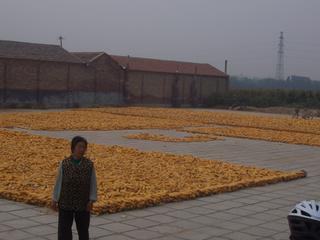 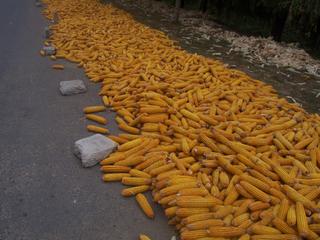 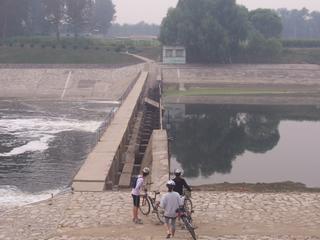 I went for a bike ride today through the countryside around here. There is a group of ladies who go a few days a week. Theo sometimes joins them and she invited me today. Their kids go to a different school and leave earlier on a bus so I couldn’t be ready to leave. Becky offered to take the kids to school but it wasn’t worth the extra juggling and hassle. So I zipped up to Starbucks directly (about 5 miles away) while they meandered through the countryside. I met them there, had a cup of coffee, then rode back.

We rode up a river road, then crossed it on small dam (pictured here). The is the river where the rowing events will be held in the ’08 Olympics,. They have their hands full cleaning this puppy up. At least it flows. Some of the tributaries in are so viscuous they just sort of ooze in. Fro there, we rode a small dirt path up a hill through some fields, including water lily fields, where they apparently raise the bulbs which are commonly sold around here.

All of these pictures were taken on the ride either there or back and all are within a few miles of our compound. It is harvest time right now and on all the backroads, there are rows and rows of corn. Some of these pictures are of that and then the big courtyard full of corn was taken in a little village nearby. The corn looks pretty hard and they just shuck it and stack it on the ground. I am fairly certain it is feed corn, not people-eating corn. They have to feed something to the 800-million pigs they slaughter every year in China. That is the figure someone told me last week and I believe it. The word “meat” in Chinese means pork. Beef is meat of the cow, lamb meat of the sheep, etc. Speaking of which, we had some phenomenal barbecue pork at a Cantonese restaurant downtown last Saturday. I thought it was duck at first and I was thinking, “God this is the best duck I’ve ever tasted, by far.” Eli was sitting next to me and he and I were practically fighting over the last pieces, so we ordered another plate. That bbq was as good as any in Texas and I don’t mean to slight Texas bbq.

Last weekend, we drove up to River Garden on this same backroad pictured here and we were passed coming the other direction by a tractor pulling a wagon, which must have had 50 people in it– just practically hanging off the sides. Jacob and Eli cracked up. Also down that road are a bunch of big rectangular man-made fishing holes. They were quiet today but on the weekends they are packed. I guess folks pay to drop a line in there to catch God knows what. Chinese people seem to love to fish. In every urban park with a little pond there are guys fishing, often with long bamboo poles with no reels. Guess it’s not hard to yank up a coy – they’re no marlins.

And back to meat, Theo’s cook proudly brought her some braised, marinade dog meat yesterday. She decided to give it a try and said it was ok, that she never would have known it was not beef if she hadn’t been told. I also saw someone selling dog pelts at the big Dirt Market downtown yesterday. It is a big open air flea market type of place. As I think I said before, however, it is a delicacy and very expensive so there are no worries about getting it accidentally. It is much more commonly found in Southern China than up here.