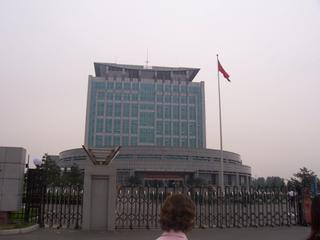 We continued the process of getting our driver’s licenses today. We had to report to a hospital clinic for an eye test first. But before you can do that, you have to all your paperwork/applications in order. Luckily, Mr. Dou already took care of that for us, turning some stuff in last week, so we had the papers with us. You need three or four photos, like passport photos only smaller. Lily brought them (she scanned our passport photos and prints them out when we need them, which is often, for club membership, residence cards, visas…), But when we got there, they said it had to be a white background and we had blue backgrounds. So we had to go to a Fuji photo place down the street and take them and wait 20 minutes to get them.

Then we walked back, photos in hand and entered the clinic, which was like a 1950s US hospital. Maybe 40s. There were several rooms, marked Opthamology, EKG, Blood pressure, etc., each of which had a line of 8-15 people sticking out into the hallway. We were the only non Chinese. Lily told us this place was only for driver’s license exams. Maybe they make Chinese people take more extensive tests. We only had to do eye. We waited in line and entered this little room with a nice old man Doc sitting there with one of those big things on his head… a headband with a large silver disc sticking up. I don’t know what it is, but you’ve seen old pictures of docs in them, Dixie probably wore one in Alaska. I wanted to take his picture and he was very friendly, but I wasn’t sure and Lily didn’t seem to think it was a good idea.

We presented him the forms and filled them out. We had no idea how many centimeters tall we were. Lily wrote her own height in for Becky, adding a CM or two, because she is really petite and I wrote 190 in for mine, thinking of my old, pre-shape skis. This made everyone really laugh. Apparently, I was way off, turning myself into Yao Ming or something, though I know that’s not true. The doctor changed it to 176. Then we had the exam.

We had to look at a book with multi-colored designs and read the letters in it. To check depth perception and color awareness, I guess. Then we sat on a metal stool, covered one eye and read an eye chart in a mirror across the room. The kind with the W-type symbols where you just point up, down, left, right to indicate which way it is pointing. It was hard, to be honest. The mirror was sort of dirty and distorted. Becky had no idea. Mr. Dou was standing next to me, giving her the hand symbols. Hilarious. The doctor couldn’t have cared less.

So we both passed, and then Lily said we had to go to the Beijing driving bureau. We got back in the car and drove and drove. It was South of town, a huge, hulking bureaucratic building. To the left of the main door was another entrance that said “Foreigner License.” We went in there. We sat down in the waiting area and Mr Dou and Lily went up in line and filled out a million papers, gave them all our many pictures, called us up to sign a few things. Then they asked us when we wanted to come back to take the written test and we said next week. Te following week is a national holiday all week and we wanted to get it done first. Lily came back and said that the next available appointment was October 11. And you need an appointment to take the test. So we are set for October 11. We have a book to study 100 questions, 20 or 30 of which will be on the test. We do not have to take a driving test, as licensed U.S. drivers.

We haven’t even looked at the book yet but we are told it is pretty hard and we definitely have to study. Our neighbor Theo Yardley told me one question was “If you come upon an accident and see body parts on the highway, you A) Pick them up. B) Go back to your car. C) Call the police. Or something like that. The question is real. I forget what the actual answer choices were except for A – that is true.
Anyhow, no one-stop shopping and no immediate licenses in China. Everything is sort of complicated and bureaucratic here. For now at least it’s okay because it is all sort of funny and interesting. I do realize that will wear off. Sitting and waiting and waiting, I thought of my dad and the hissy fit he threw when taking me to get my driver’s license when I was 16, how he screamed at the state police guys there when they told him he had to get his license notorized because he had written on it. “A notary is just a pencil geek with a rubber stamp!” I think that kind of shit would land you in the pokey around here. Actually, it’s just inconceivable for all but the deranged.