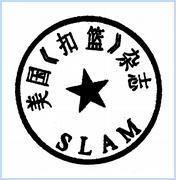 To do anything official in china you need a seal or CHOP, whatever that stands for. Gov’t issues it and you need to place it on everything and anything you submit. Here is the new, official SLAM CHOP.

I have already suggested to the magazine that we hold a contest and the first person to have this tattooed on themselves gets a free lifetime sub.

I got this and some other papers making the official and my status official at a big gov’t ministry/police headquarters. it was packed with people –foreigners getting visas, Chinese getting passports. all manned by uniformed police. you can imagine the scene. Lilly, the WSJ office manager and my guide through all such things, hands the cop all the paper work and he begins very officiously going through them, only to stop, look up at me and smile and say, “I very like Slam.”

He goes back to work for a while, then stops again and looks up and asks, “Who do you think is the best Chinese basketball player after Yao Ming?”

He thinks for a while and says, “I much prefer the NBA, actually.” then he names a few other Chinese players, whose names I more or less immediately forgot, but I got the gist of one guy, a 35-year-old shooting guard for the Army team who is a three-point gunner and scores 35 a game. He also told me that next week is the big inter-police hoops game and he was practicing a lot.