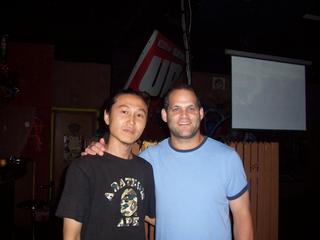 My day spent roaming around Beijing with Tracy McGrady is recounted here:

I just wrote a long entry and lost it to computer whimsy, which is quite depressing.

I just want to reiterate how sad I am to see the destruction of New Orleans, one of my favorite cities in the world. It is just a horrible situation. Truthfully, the city always was sort of fetid and just barely hanging on, which was part of its charm. But it doesn’t take that much imagination to see it all washed away. And as profound as my sadness is, my disgust is equally deep when I hear people so quickly start talking about the price of oil. I do understand the global significance of high oil prices an dhow many people this affects but it just seems vulgar to turn so quickly to that in the midst of one of the great cities being washed away and thousand of people feeling incalculable pain. being here in a place that seems to quash its history daily makes me all the more appreciateive of a place that so stubbornly clung to its idiosyncracies in the face of an ever-homogenizing country and world.

The clearest sign of just how big of a disaster this is, is that W actually ended his vacation early. I’m sure he’ll cram those extra two days in somewhere. if I am overstating the situation there, please let me know. I would welcome being wrong.

Everything is fine here. I got my journalist accredidation as I said and B has her permanent resident visa, which allows our move to commence. She met with the movers today and we should get our first shipment next weds and the big one next Friday. Work is supposed to be done on the house tomorrow (Friday). So by next weekend, we should be in da crib. I think we’ve done really well given the circumstances and it should really smooth out when we can settle in to the house.

Key to the whole thing has been Jacob and Eli’s smooth transition into school. Things continue to go well on that front. Uniforms, which we feared, have been a non issue so far though Jacob has not worn his regular one yet (he likes the PE kit). Monday it becomes compulsory and he seems fine. Most kids are wearing them now anyhow. Jacob seems to be establishing himself as something of an alpha male in the class. Funnily enough, I think his Maplewood upbringing makes him something of a street smart dude around this int’l private school set. I heard this kid Zach in his class tell two girls the other day that “Jacob is the fastest kid in our class, and also the sneakiest.” I tried to get J to explain what the latter met but didn’t get very far. He was clearly proud, though. And he is very sneaky and clever. I’m just not sure what it means in terms of school.

I went to a cirriculum meeting for Eli’s class (year 1, as they call it – kindergarten in the British system refers to pre-K). The English headmistress’s speech made my eyes roll back in my head. I don’t know what the hell she was talking about but spelling tests and homework were def. part of it, along with along explanation of the chain of command to handle discipline issues. Discipline issues! And remember the kids in this school are the most well-behaved, docile, high achieving batch you could imagine. These Brtst make everything so complicated. There is so much talk of process, this uniform, that uniform, this head master and that house leader, this folder and that journal. Key stage one and key stage two and blah blah blah.

I was falling into some mysterious mix of stupor and rancor when she mercifully ended and we went to the classes. There I was greeted by the reassuring presence of Miss Deanna, Eli’s very American teacher. And she seemed like… a kindergarten teacher. I am not ashamed to admit that I am very pleased both boys have American teachers. And I actually feel really good about the school, as long as I don’t have to talk to any of the myriad British administrators who doubtlessly feel the need to justify their probably insane salaries.

Anna is also enjoying school, which is three hours a day, 8:30-11:30. Her ayi Ding picks her up and brings her home, where she has play dates and runs around playgrounds. Ding seems to be working out well. She seems very kind and smart and
Anna likes her, as long as I’m not around, which makes her point to ding and say, “you go home. Daddy!” Her English is just good enough – she canu nderstand us and communicate the essentials. She is very pleasant, probably about 50, seems to really enjoy anna and says, “oh, wow!” a lot. I think it is her fallback English expression. Anna and the rest of us miss Paulina and Stephanie a lot, though. Someone please say hit to them or maybe they’ll read this themselves.

I’ll leave you with a photo of me and the owner of Club 13, a Beijing metal club where I went to a tribute guitarist Dimebag Darrell last week. I went with a bunch of guys from Painkiller, a Chinese hard rock mag. They all treated me like royalty, plying me with beers, Tshirts, CDs, magazines. I have also been in touch with a bunch of Slam readers here and elsewhere in Asia. It is really gratifying to know that GW and sSam have reached into these weird corners of the world and affected people so strongly.

If you’re reading this, drop me a note so I know you’re out there. And I’m sorry if I repeat any tales – remember, I can’t read this damn thing!

a photo on slamonline.com A really good essay on New orleans
Scroll to top