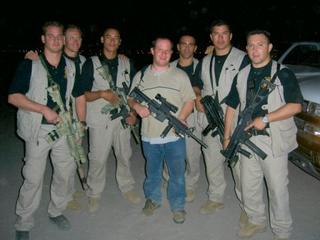 I looked at this picture of my cousin Danny traveling the U.S./ Mexican border with a SWAT team in search of drug smuggler sand I felt two primary emotions – thrilled for Danny, because I know he loves this kind of shit; and utterly depressed at the utter and complete folly of the whole escapade. Why aren’t those muscleheads out in Afghanistan trying to bring back Osama’s head on a fuckin’ stick? How much of colossal waste of time, money and energy is this ongoing “War On Drugs?”

Rodg, if you read this, please post the info from your professor friend who has written extensive and real academic musings on this subject? It is an unwinnable “war,” and even if we somehow succeeded in stopping every twig of sensie and coco leave from entering the country, what would it really achieve? Rednecks are out buying Benedryl and cooking up crank in every little motel in Iowa an South Dakota. Apparently, that stuff fries your brain twice as fast as any opiates anyhow –and rots your teeth out, to boot. And it is made from cold medicine!

What if over the last 15 years, some of these resources had been spent tracking down the fuckers who want to destroy our civilization instead of running up and down thousands of miles of border hoping to shoot to kill some poor wetback mule? Take him down and the fat cat dealer is still sitting in his mansion on a hill somewhere down South, sipping pure Agave gold tequila, polishing his Bentley and preparing to line up another desperate sucker to wade across the Rio Grande or swallow a few condoms filled with Horse. It is madness and someday the history books will reflect this.

Cool picture, though, Dan. I hope they took the clip out of that thing before they handed it over.

Pictures of yangshou Like the Yankees, we gave a valiant effort but failed.
Scroll to top