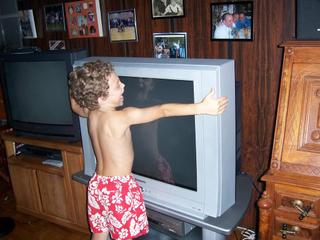 This classic picture of Jacob hugging good bye to our beautiful new TV was taken by cousin Danny and comes courtesy of his daughter Rachel’s blog, www.rachelcohen.blogspot.com.Giving up that TV was probably the most difficult thing for Jacob about leaving home. Having it move simply across the street only somewhat lightened the burden.

Great job on the blog, Danny. She looks adorable and it’s great to see her walking. I do have grave concerns about all that writing in her voice, however. It is a slippery slope, my friend and the next thing you know you will be hiring Kathleen Turner to do voiceovers.

Almost as remarkable as Jacob’s shunning of TV is the fact that he couldn’t wait to put on his “Best dressed” uniform yesterday when he came home and saw I had picked it up. He wore the blazer all night and before bed, tried on the shirt and pants, also insisting I put on the tie. He wanted to wear it today, even though he doesn’t have to until tomorrow. Wonders never cease. Pictures of this will be up within 24 hours, I promise.

Tonight, Becky and I are going out to dinner with Neil King. Neil is one of the Journal’s top DC reporters, here to cover Sec. Of Treasury John Snow’s trip. He and his wife Shalaigh Murray (now Washington Post White house reporter, I believe) actually worked with Becky at the Tampa Tribune’s Pasco county bureau in 1989-90. Believe me, if you were there, you would know how wild it is that the three of them have gone as far as they have from that place is pretty remarkable. And they were visiting us and staying at our 27th St. pad for the worst night of my sporting life – Francisco Cabrera’s heartbreaking, Game 7 winning hit in the 92 NLCS. Most of you know what I’m talking about. We are going out for some Brazilian food tonight to catch up.