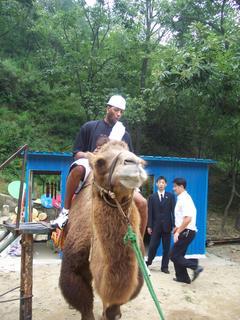 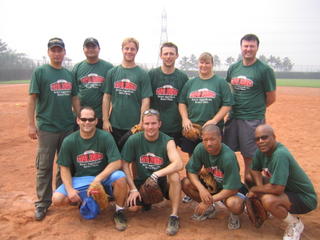 This picture of TMac on the camel never gets old to me.

My first sports column is running in the November issue of That’s Beijing, which is an English language monthly. I am not sure what the circulation is, but it is widely read.

Here is what I turned in. It is certainly not my best work but hopefully as I keep doing this I will actually start knowing what I am talking about. I am used to writing from a voice of authority, very confident in working for Slam and GW that I know my audience and my subject matter very thoroughly. This is quite a bit different and a bit of a stretch. I am feeling my wa and hope to hit a stride in the next few issues. It is th eleast I have been paid for a story in a long, long time and I am more emotionally wrapped up in making it good.

The curse section was taken out, because the censor would not approve. That is a first for me. Even my high school paper did not have a censor, as some of you well know.
***

Biking through a small village South of Yangshuo last week, I was heartened to see two basketball hoops worn bare by hours of use. Between that and the crowds of people coming to see the flower displays of Olympic sports in Tiananmen Square right across from the ticking digital countdown to the Games, it is not hard to see the next revolution coming in China – the sports revolution.

I’m watched the trend from afar as a senior editor of SLAM Magazine, the world’s leading basketball magazine. I am now SLAM’s Beijing bureau chief, so it’s no surprise that I have an obvious and admitted affinity for hoops, but all sports are fair game for this column– local and Western, participatory and not. You may see an interview with Yao Ming one month and a report on a table tennis tournament the next, some info about local football clubs followed by the inside scoop on the China Open. If there’s something you think should be covered, drop me a line any time at alanpaul@pobox.com.

Within a few weeks of arriving here in mid August, I had spent a day with Tracy McGrady and an army of Adidas employees, zipping through Beijing with a police escort and hiking the Great Wall with the NBA All Star. I even watched him clamber up one of those musty old camels and amble around, resulting in the picture you see on this page, one of my all–time favorites. I’ve been covering basketball players for a decade and I’ve never witnessed anything quite so intimate and silly. It’s the type of access we stumble over ourselves to get in the States, but it just fell in my lap here.

A day spent in a van-full of Adidas execs was also quite enlightening. It was no coincidence that China was the locale when McGrady became the first NBA star to launch a signature shoe (the TMac V) outside the U.S. The Middle Kingdom has emerged as the world’s biggest shoe-company battleground, which is why McGrady’s visit was preceded by Lebron James’ and followed by Allen Iverson’s. Nike, Adidas and Reebok each had their top star in China this summer as they battle to position themselves for the explosion they expect following the ’08 Games.

The growth in amateur participatory sports in Beijing is at least as interesting to me as what the big guys are doing. It didn’t take me long to find my way onto a softball team, playing for the mighty Papa John’s pepperonis and coaching not one but two youth soccer teams. As you would expect, the softball teams were largely dominated by North Americans, but I was pleasantly surprised at the strong left field play of an Aussie Embassy guy and the rifle arm of our Danish shortstop.

And don’t even get me started on the all-Chinese team that crushed us in our final game of a three-week tournament, or the 14-year-old girl shortstop who gunned me out as I pulled my quad chugging down the first base line. That might have had something to do with the three inches of loose sand I was slogging through. The field looked absolutely perfect but the infield was a sand box – clearly the work of someone who carefully studied photos of a baseball field without ever actually setting foot on one.

•The first excellent Chinese curse words I learned were “Sha bi,” a particularly nasty and funny term for a cow’s female anatomy and the preferred crowd chant for particularly venomous sporting events—like, say a Chinese/Japanese soccer match. I recently learned that the government is concerned that such “jing ma” of “Beijing scolding” chants will be an embarrassment during the ’08 Olympics – can’t you just see Bob Costas trying to explain what it all means? So authorities have been coaching fans not to use them and are reportedly going after anyone who initiates a jing ma. If anyone has seen any evidence of this crackdown, please drop me a line.

Participatory sport of the month: Gaelic football. Unless you’re Irish, you’ve probably never seen a match of Gaelic football, an unusual hybrid of rugby and football. The sport is gaining popularity in China and throughout Asia since being introduced to Shanghai by some Irish expats about a decade ago. The Beijing club trains every Saturday at the Western academy of Beijing (WAB) and fields both men’s and women’s team. You don’t have to be Irish, either. Visit http://www.beijinggaa.net for details.