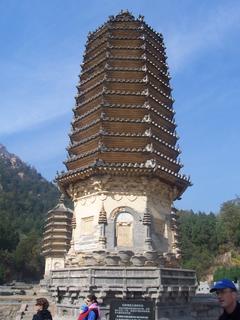 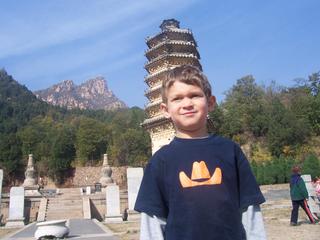 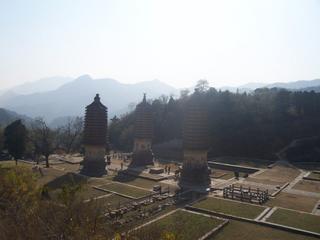 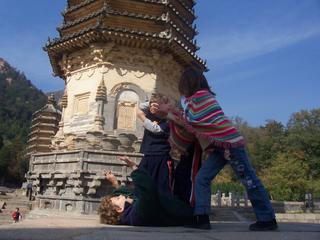 Last Saturday we went to the Silver Pagodas, 800-year-old Buddhist pagoda temples of some sort. This is less than an hour from our house and really beautiful. There are some great hikes allegedly leaving from behind these things, but we just trekked up and around in a circle. Jacob had seen them in a hiking guide book and chose them as our destination and it was, I must say, a good choice.

We hired a driver, Mrs. Lu, for the day, for about 40 bucks and set off following the yardleys, our neighbors across the street and had a very nice afternoon. We had apicnic of sorts. The Yardleys had some real food. We had granola bars and apples, which is all the kids eat most of the time anyhow. It was a little lacking for us.

There is an old sacrificial altar there. I explained what it was to the kids and they took turns sacrificing each other, then it was my turn. Then Olivia Yardley, 6, asked me why they used to kill animals.

“They thought it would make God happy.”

Screwed up face, cross-eyed look. “That s not happiness, Alan!”

Then she and Jacob were off and running but Eli was lost in deep thought. He started asking me a lot of questions about God. “Does he control everything? Is he a man? Where is he?” I kept answering with a bunch of grey, mushy gobbledy gook and feeling bad about it. That’s not what a five year old needs to hear, but I couldn’t bring myself to give definitive answers. Then we mercifully moved on. Then he came back to me and said, “Is God just a giant head?”

Good questions, young Eli. At least I didn’t tell him to ask Mom or better yet, Jim or Theo Yardley.

Later, the kids were all running around and I was playing a spirited game of monster with Anna and George Yardley. I love saying his name, as he is namesake of but not related to this hoops hall of famer. A stout Chinese gentleman of about age 50 was standing in front of one of the pagodas, about 15 yards out. He whistled loudly – I have always considered it a failing of my life that I can’t dog whistle like that – and made some extreme hand signals indicating for us and our kids to shut up. His point was clear. We followed suit as best we could and he proceeded to do a whole ritual of bowing, with his hands bent in a prayer position. He move don to the other pagodas and did the same.

Meanwhile, we were packing up and barreling home. We participated in a progressive dinner that night and Becky had signed us up for a main course, somewhat unknowingly. And Mr. Li was already booked for a party so tarnations, we had to do this ourselves. I ended up making a lamb stew from an Epicurious recipe I have used before and it was really good, I must say. Yoo Ying came over to help us out and she tried some and said to me, “You cook hen hao!” (very good) and gave me a thumbs up. That was nice. I think she’s been sot of puzzled about me and what I do all day in this room with the door shut. Now at least she knows I can do something.

It was a nice evening, with lots of wine and many Aussies. The only thing of real note was that one of the guys over here for dinner was this Aussie who work s for the Chinese Automobile Association. We discussed our drivers license fiasco with him and he laughed and said, “of course you ailed.” And proceeded to tell us another place we can go, for about 100 bucks where the test is written rather than computer and the results, uh, tend to be favorable. We also met a German guy who took the test at a place that is only Chinese. Your driver can come as your “translator.” I wanted to jump on these options immediately but my wife is too earnest. She thinks we should proceed with out plan first. I’ll let you know how this plays out. Or maybe I will anyhow.