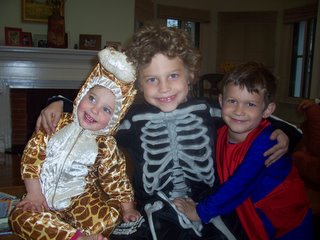 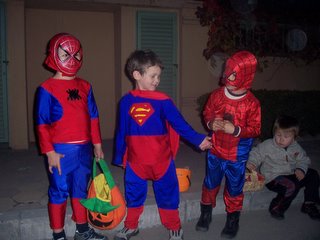 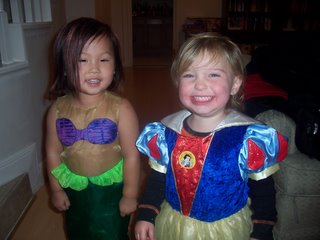 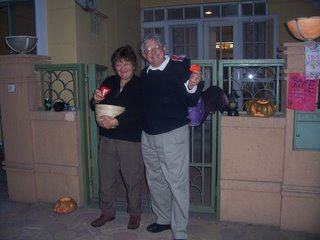 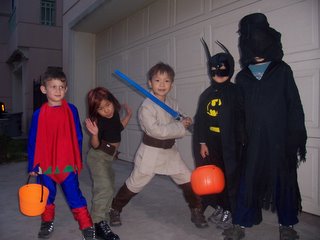 Our first Halloween in China was a success. They do it up pretty big time in the compounds and the kids were able to double dip. They celebrated on Saturday at River Garden, where we used to live, and we went up there with Kathy Chen and her family for trick or treating, haunted houses and a little party. Fun for all. Except that the Haunted Houses are run by the Marines (all the Embassy people with families live up there) and apparently they were really scary. I say apparently, because I took Eli to the smaller one. He walked in the first room, looked round at the flickering lights , grabbed my hand and said “let’s Go.” And we did.

Despite our best attempts at getting Jacob into that one, he insisted on upstairs with the Kin, Kathy’s husband, and a bunch of kids. They waited in a line for an hour. When they came out, Jacob said it was a little scary but seemed happy, though a little freaked out by “the guy with the real chainsaw chasing us!”

No problems that night, probably because he was exhausted. Sunday night, however, he woke up about four times with nightmares, until we allowed him to sleep in our bed. He was really freaked out and upset and had mixed his horror from what he saw with some other unrelated fears into one big terror jumble. Monday morning he went into some details with me about how scared he was and I really wished we had forbade him from going in. But that would have been a disaster, too.

Anna is hilarious. It took her about one house to understand what was happening and become very enthusiastic. She was running up to as many houses as she could muster. But she never really grasped the concept of putting stuff in her little basket. She just figured that someone was giving her candy to eat and popping the new stuff into her mouth, even if it meant spitting out something she had just put in . It was pretty funny. We tried to explain, but to no avail. Instinct is a powerful thing. Try telling a dog to have that T-bone for tomorrow.

Halloween here was Monday night, so the kids had a second go at it. You can imagine how that went over. Becky’s parents, our first visitors, arrived here Sunday, with new costumes for Anna (giraffe) and Jacob (skeleton). They were also able to hand out candy while we ran around with the kids a bit. Jacob went off with friends and we only saw him when he came back to dump out his bucket and go back for more.

The whole thing is pretty funny here. They put a sign up in the clubhouse about a month in advance explaining the holiday in details. “Children dress up in costume and ring your doorbell. They say ‘Trick or treat’ and you give them a piece of delicious candy.” They hand out Halloween letters and if you are participating, you are supposed to tape it on your mailbox and turn your light on

I was surprised by how many people partook. There were hundreds of kids running around. A fair number of Chinese got into it – I don’t think the Chinese kids were ever happier that their parents chose to live in a Western compound – and many, many Europeans and Australians, for whom it is also foreign. We were walking down our street with Anna and the Yardleys when an Aussie woman they know came riding by in one of these tricycle bikes, with a big back used to carry kids. She had it filled with beer and was giving it away to parents. We gladly accepted.

“Cheers!” she said. “This is an Aussie Halloween.”