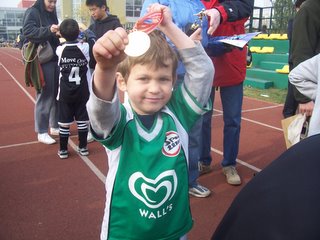 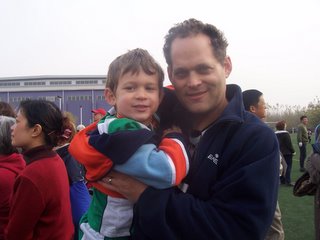 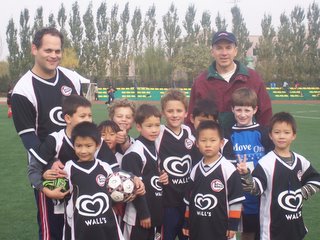 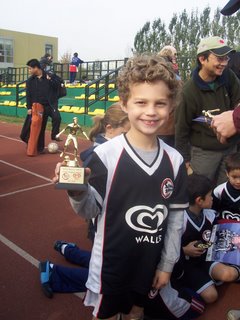 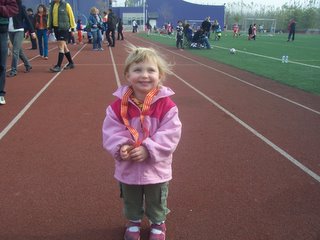 Last Saturday was the final soccer game for both boys. I coached both teams and I was completely fried every week by 11:30 Saturday morning. Sometimes we would go out for breakfast afterwards at Steak and eggs, this diner nearby which is quite good, and I would feel like ordering a shot and beer instead of a cup of coffee.

I swore I wouldn’t double dip, but I have coached so many of J’s teams that I thought I should coach Eli. I signed up as assistant coach on Jacob’s team, which I was until the head coach started having business trips every week. I was head coach for the last month. It was actually a lot of fun and his games are starting to resemble real soccer games. The real funny thing was when I would ref. (One coach does it every week, which create some problems, actually.) I really don’t know the rules. I think I was a little better than the Chinese softball ump who called an out when the hulking Marine commander playing third base for the Embassy team caught a foul ball off the fence, but I was definitely a work in progress. I took some after school tutorials on the playground from Mr. Wyatt, the Dulwich PE instructor who played soccer in college.

I have to admit, though, that I really did not enjoy coaching Eli’s team. First of all, 5 year olds are largely too young to really do this. Their attention span is about 20 seconds. And we spent the first half of the hour doing drills and practicing. Imagine trying to run drills with a bunch of stray cats and you’ll have a picture. Having Eli attached to my left leg three quarters of the time did not help. My co-coach was one of the most boring, least inspiring guys you can imagine, but he showed up with a plan every week so I happily let him execute it. A lame plan is better than no plan, right?

Elis pent quite a few weeks basically not playing and I almost left him at home for the last go. I’m glad I didn’t because he actually played and did pretty well. The other funny thing is, of all the 5 year olds, there are probably 6 or 7 who can really play and they are pretty amazing. Most of them are Europeans. Actually, all of them are Europeans. Eli’s friend Brandon is one of them. He’s also big and strong and he kept taking the ball and running down for breakaways. It felt really unfair to have these poor little kids standing there at goalie, like a house trying to stop a thundering rhino. Luckily, no one was hurt and the kids are so out of it soccer wise, they only partially release they are being beaten like a drum.

Anyhow, as usual, the kids’ sporting life was good for our social life. We met and hung out with a bunch of people this way. Jacob now will start playing floorball this Saturday. i think it is like field hockey with a ball, but I don’t really know. Apparently, Jacob excelled at this game at Camp Riverbend and he is very excited. Guess who is coaching?