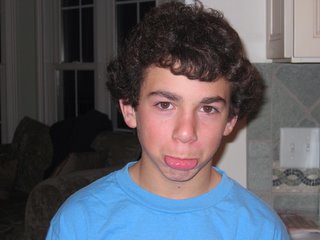 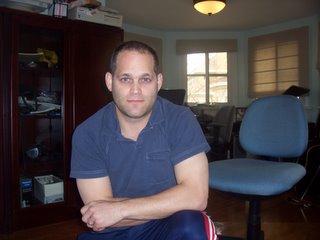 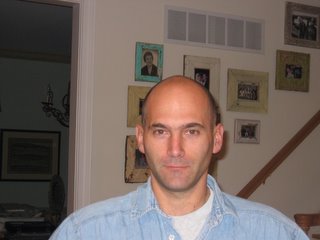 The email keeps pouring in and the hair keeps falling off.

Delaware Dave was next to the barber’s chair. Photo included here. His 13-year-old son Jesse did his part by trimming his Jewfro from insane to extreme.

I am subject to ridicule for this haircut, which is short enough that when I walked in to pick up Eli after getting it two days ago, the whole class broke up laughing and Race Cameron (son of Jacob’s teacher Mrs. Cameron) said, “Hi, Mr. No Hair.” I asked for a number-one cut. Dixie says it looks like a three. Who knows if they use such terms here in China. My haircutter did not speak English.

Meanwhile, this was just the excuse that Delaware Dave has been waiting for to take it all off, though frankly he always keeps it virtually this short.
Here was his response to DK’s shaving:

Nice. 1st Lemming over the cliff. I’ll be seeing my barber Tony soon. A few years ago I was at a meeting in DC and decided to get my hair cut. The big black woman cutting my hair tried to talk me into shaving down to the bone. She told me, “honey, you take all that hair off you’ll have women circled around you trying to lick whipped cream off your round head.” Time to test that theory.

Lemmings indeed. All I did was make a proposal and bam. Of course, I pulled over at the edge of the cliff and watched the rest of the lemmings tumble down below. But we did apparently raise Dixie’s spirits and stop him from contemplating a wig purchase. Thank God for that.

I think we should also pause for a moment to appreciate the fact that our little group has managed to turn even our fearless leader’s chemotherapy into a pushup contest. Some things never change and this is healthy, I suppose. I may have kept a little tuft of hair but I still will take on any of these guys in a hot pepper eating contest.

It should be also be noted that Dixie and DK both report that DP’s DC barber may have been on to something.

They loved it at work. Can’t believe how young it makes me look. Delaware Dave’s barber had it right. Look out D.K.

Dixie himself is continuing to go to work at Children’s Hospital, where he debuted his new ‘do yesterday, apparently to similar accolades. He claims all the nurses were ooing and awing.

He writes, Your blog pic doesn’t do my new look justice. They loved it at work this A. Perhaps Delaware Dave learned something of great value in D.C. Love, Dad

Another valuable lesson is nurses and office employees often praise doctors and bosses. Just a thought.

Dixie takes it off Speaking of hair…
Scroll to top