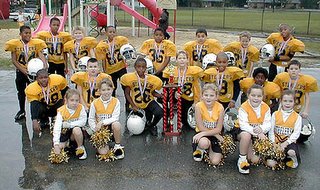 This is one of my favorite pictures from the Steelers Nation section of the Post Gazette website. It is a youth football team from Georgia, coached by Pittsburgher Army guys on a base. I submitted my Beijing group shot there about an hour ago. Some classic stuff there.

As planned, I put the kids to bed last night, kissed Becky good night and jumped in a cab down to Eric Rosenblum’s apartment, which is at South Chaoyang Park, around the corner from the Goose and Duck Pub. I packed only the essentials in my backpack – change of underwear and socks, toothbrush, contact case and solution and my Bradshaw jersey, which I got in Hoboken way back when. It was a leftover, not a throwback.

I got there close to 11, chatted a bit and we both turned in. He said he’d get me up by 3:45 after we decided that actual kickoff would be 4:06. I awoke and sat bolt upright in bed at exactly 3:30 am. My Steelers internal alarm clock was primed. At exactly 3:45, Eric appeared. I threw my contacts back in – sorry, eyeballs– pulled my Bradshaw jersey on and out we went. No time to tape our ankles or put on eye black.

We walked into the Goose and Duck at 4:05 as the teams were lining up. We quickly found George Shader, the Squirrel Hill native who posted this ad on That’s Beijing.com that got this whole thing rolling:

Steelers Fans Converge
Ok all you Steelers Fans.. It’s time to converge on the Goose and Duck and support the Steelers..
Time: 4:00 am
Date: Monday, Jan, 23rd
Place: The Goose and Duck (Chao Yang Gong Yuan Xi Men)
Let’s see if we can gather the faithful together to witness Denver’s demise.

We settled into the bar next to him and met Terence Chang, a Chinese American from Albany, NY area who is a longtime Steelers fan. There were about 8-10 Broncos fans there as well. The guy right next to us was nice, cool, good football fan so we were all civil.

A few random Chinese guys and gals were behind us playing pool and drinking heavily, oblivious to the game. We ordered up some coffee and sat down to watch a serious ass beating. You all know what happened, so I’ll just give you some color.

Going in and out of commercial breaks, ESPN International in their infinite wisdom shows “great Wimbeldon moments.” We saw Kurren-Lewis, Lendl-Becker, and some fruity looking doubles guys. After two coffees, Eric and I ordered our first TsingTaos when the Steelers went up 17-3. It was 5:15 am. We almost fell off our stools trying to high five and hug each other a few minutes later when Ike Taylor picked off Plummer and began hammering the final nails into the Broncos coffin.

At halftime, ESPN international showed us, what else?, soccer highlights. No time to revel. Eric played a game of pool with a Broncos fan. I chatted.

The second half got under way and shortly after the Broncos scored to make it 24-10, a Chinese guy pulling a suitcase walked in, approached us and said, very politely, “May I join you? I live in Pittsburgh.”

We made room and pulled up a stool for Mr. Ping An, a native of Xi’an China who lives on Bartlett Street, a block down from Beth Shalom. He is on his way home to see his brother and parents for Chinese New Years and, after being stuck in Tokyo for 30 hours, took a cab straight from the airport to the G-D. That impressed me. He has lived in Pittsburgh for two years and loves it and already considers himself a citizen of Steelers nation. We all thought it was funny that the three Sq. Hill guys live in Beijing and the Chinese guy lives in Squirrel Hill.

When the game ended, we did the requisite hugs and high fives and also bought a round for the bar, including all the mopey Broncos fans, who were bumming they woke up at 3:30 for this. Only one or two took us up on the offer. ESPN immediately went to another great Wimbeldon moment, involving Tracy Austin and Billie Jean King. I don’t think the programmers over there understand the whole football/testosterone thing. This constant tennis on grass stuff every break really brings you down. Someone mentioned that at least Tracy Austin had nice legs and the lone female in the bar, a bummin’ Broncos fan, pointed out that she was about 16 and called us perverts.

Eric invited us all over to his place for pizza so we headed out into the just-brightening morning. As soon as we walked outside, Ping pulled a spanking new Steelers cap out of his pocket and put it on. We had a good time recapping the game and talking Pittsburgh and china. Alas, we will not be able to reassemble for the Super Bowl. Eric, lucky him, will be in Jerusalem for Passover, watching the game in the bosom of the Burgh. He only had to pay $1,000 to rebook all his tickets to stay another day. Small price to pay.

We are leaving for Phuket on Thursday night and coming back on an overnight flight that lands about an hour before kickoff. Keep your fingers crossed for no travel problems. I was en route from Boca and a Mom and Pop visit 10 years ago for the last big game, made it back for the second half.

Now that I’ve had a few hours to digest it all and read every word I could find online, I am exhausted but elated. I still can’t really verbalize why I care so damn much, but I honestly teaedr up reading about Bettis’ speech to the team Saturday night and also about the celebrating in the streets of Pittsburgh. I loved the stuff about the police on the South Side high fiving everyone as they kept order. This little vignette from the streets of the Southside really touched me for some reason:

Joyce Morel and Josie Rottolo, both waitresses at Tom’s Diner, grabbed pots and wooden ladles as they began their slow jog to the center of the crowd on Carson Street while banging their pots with wide smiles on their faces.

“A mission to the Super Bowl,” responded Ms. Rottolo.

I’m not sure why that struck me, but it may be because I have vivid memories of having parades down Guarino Rd. with all the kids marching and banging pots and pans with wooden spoons. We did that to celebrate the Pirates’ 1971 World series. Is it a Pittsburgh thing? Commonplace everywhere ? I don’t know.

And I also don’t know just what it is about Pittsburgh that inspires such loyalty from the Diaspora but I know that it’s real and I know that the Steelers are the vessel for virtually everyone who loves Pittsburgh to express their feelings. Maybe the city is just so manly that it collectively can not express emotions except through sports, just like our gender. I just reading Esquire that watching a football game with your father is the equivalent of three hugs and five I love yous. Just think of the city of Pittsburgh as your father and you’ll understand.