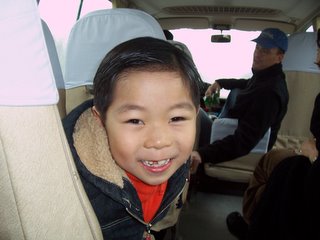 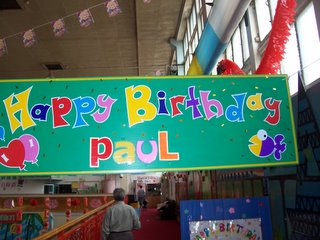 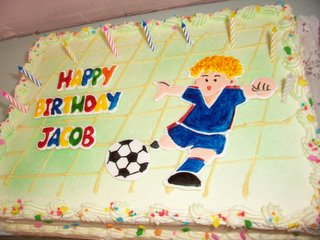 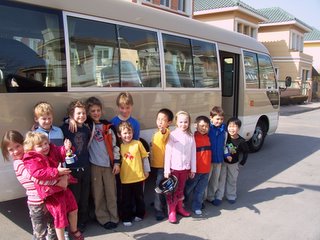 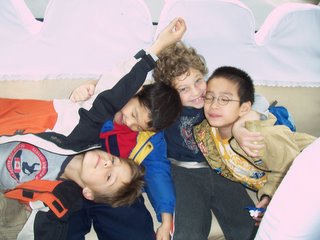 Jacob’s party was a big success. All the kids met here and piled onto a bus, which we hired from our compound and we set sail for Fun Dazzle downtown. I have described the place before, but in case you missed it or forget, it is basically a huge indoor playground, with climbing thingies, slides and the absolutely biggest ball pit you can imagine. It must be 50 yards by 25 yards.. just huge.

Jacob and all the kids absolutely love this place an every time I go I snicker at the thought of my sister seeing us now, because she is revolted by the unsanitariness of ball pits and won’t let her kids in them. Frankly, she has a point, and the pit at Fun Dazzle puts any and all others to absolute and total shame.

Anyhow, the kids were pretty well behaved on the bus. I only had to use my cattle prod two or three times. We got there and 4 or 5 more kids met us there, mostly Chinese kids who live downtown. They all played like banshees without anyone getting hurt, the pizzas arrived close to on time and we got a chuckle out of the sings they put up saying “Happy Birthday Paul Jacob.” We did have to reprimand several boys, including Jacob about pinching girls’ butts. Eli, in a bid to impress the older kids, stood up on his chair mid-pizza and yanked his pants down. His play worked – he prompted great bursts of laughter — and the admiration was only deepened, when I yanked him out of the room and gave him a stern talking to. A huge shit-eating grin never left his face.

While still capable of being perfectly angelic and adorable, Eli is really starting to flex his muscles and push back, but that is a story for another post. I often think of what my mom has said about me: “He was the perfect child until he was 4.” My perfection ended when I returned to the table from the bathroom during a dinner party hosting Japanese guests who couldn’t a lick of English stark naked and proceeded to run around the table doing an Indian war chant, before opening and shutting the basement door with great rapidity and refusing to let go of the door knob as my folks tried to yank me away. I guess I should not be reprised that Eli has it in him.

When the party ended, we had to get 21 kids together and out and onto a bus, while making sure the kids who met us there found their folks. As we were leaving, Becky said, “Did you see James’ mother? “ I had not, so as I and the Yardleys and one other mom who accompanied us, escorted the kids onto the bus, she went back to make sure he was okay. I got everyone the bus, but no Becky…

After five more minutes I called her. She had found James – playing happily by himself. He knew his mom’s number, she called and the mother said, “Oh is the party over? I’ll be therein a half an hour.” We were already a half hour late. Becky found one other kid there. Still playing with his family, who took responsibility for him and she joined us. We pushed off and were on the expressway when I got a phone call from another mother, who barely spoke English. “This Owen mother. When your party over?” Oh no… did we leave another kid there unaccounted for? My heart dropped. I handed the phone over to a Chinese speaker and started asking other kids, who insisted they had seen Owen leave with his mother. It turned out his ayi had picked him up and the mother was trying to figure out when they would be home, but that was scary. We got home before 1 pm and most of the kids took off.. A few lingered… I was ready for a stiff drink and popped a beer.

Happy Anniversary To Us More birthday pictures
Scroll to top