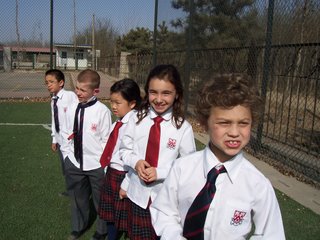 The story about jacob quoting that puppy poem? then laughing? totally sounds like my niece again…sounds like someone might like caroline! one day emma came home from school and tells me on the phone that a boy is being mean to her. i tell her that he probably likes her cause that’s what silly boys her age do when they like a girl. i ask if she likes him. she says she likes him but not his personality. and the best? his name is raoul. raoul! too too funny. the pirate ship and the skull and the polite pirate asking if the other wanted gum? these kids kill me!

Oh, Jacob and his friend Edward definitely like Caroline. In fact, I was discussing it with Mrs. C yesterday and she told me that she had been observing them all more closely in the last week since the incident and saw how close they all were.

My mother was concerned that I was endorsing and encouraging Jacob’s hitting. To make it clear, I did not endorse that at all and I was very clear with him that hitting was wrong and he can’t do it. I did not even express to him that I was proud of his standing up for his team, though I was. I want to raise a little Jason Kidd of life, not a Stephon Marbury.

One other funny thing. I was telling Becky about the pirate ship picture last night and Jacob was here. As soon as I started describing it he cracked up and finished the description. He knew it was funny and was in on the joke, which really surprised me and changed my whole perception of the humor.

Should I be proud of Jacob for this one? Tom in town… off to Hong Kong
Scroll to top