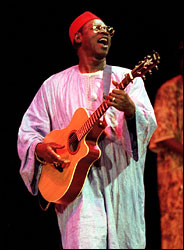 I really dig the music of Ali Farka Toure, which draws such a distinct line between blues and african music. i was really sad to hear about his death. I strongly recommend anyone checking him out.

He did an album with ry Cooder called Talking timbuktu. I have not heard it but I’m sure it’s great. The two I have and love are The source and Niafunke.

This obituary is excerpted from the NY Times. Complete obit is here: http://www.nytimes.com/2006/03/08/arts/music/08toure.html

Ali Farka Touré, the self-taught Malian guitarist and songwriter who merged West African traditions with the blues and carried his music to a worldwide audience, winning two Grammy Awards, died in his sleep on Monday at his farm in the village of Niafunke in northwestern Mali, the Ministry of Culture of Mali announced.

He was either 66 or 67; he was born in 1939 but he did not know his birth date. His record company, World Circuit Records, said he had suffered from bone cancer.

Mr. Touré’s deep grounding in Malian traditions made him one of African music’s most profound innovators. “Mali is first and foremost a library of the history of African music,” he said in a 2005 interview with the world-music magazine Fly. “It is also the sharing of history, legend, biography of Africa.”

In Mali he was considered a national hero. At the news of his death, government radio stations there suspended regular programming to play his music.

Mr. Touré forged connections between the hypnotic modal riffs of Malian songs and the driving one-chord boogie of American bluesmen like John Lee Hooker; he mingled the plucked patterns of traditional songs with the aggressive lead-guitar lines of rock. He sang in various West African languages — his own Sonrai as well as Songhai, Bambara, Peul, Tamasheck and others — reflecting the traditional foundations of the songs he wrote. His lyrics, in West African style, represented the conscience of a community, urging listeners to work hard, honor the past and act virtuously.

Mr. Touré was his family’s 10th child, and the first to survive infancy. “Farka,” a nickname, means “donkey,” an animal praised for its tenacity.