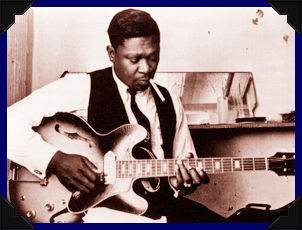 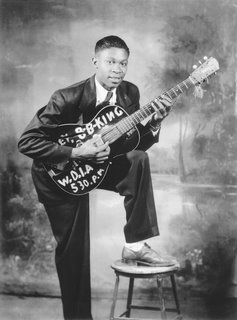 I just posted this ina B.B. King thread on the Guitar World.com message board.

I also inspired me to dig up the story I pasted in on the bottom, which I wrote years ago when B.B. debuted a column in Guitar World.

I have seen B.B. many, many times. The first time was in college. He came to the Michigan Theatre and I wrote about it for the Michigan Daily, my college paper. I was really excited. The show was just fair. The band was good and B.B. was a great showman and sang really well but he barely played. He ripped off no extended lines, which was a little frustrating. He would play a great lick, and then just stop and start shucking and jiving or let the other guitarist take over.

I thought, “This was cool to see but he’s not so great any more.” Then less than a year later, he was playing the Masonic Temple in Detroit with Albert King and Bobby Bland. I went with a few friends. We were in our usual scrubby T-shirts and jeans. The rest of the crowd was almost all older black folk dressed like they were going to church.

All three performers were excellent, if brief. B.B. was totally different. Completely other show. He was charming, funny, but less hammy and he ripped on guitar. It was so cool.

End of the show, we were blocked into our parking space. I saw three old ladies get into the car in front of us and start up and I waited for them to leave. They did not do so. I waited some more. Nothing. Not wanting to be rude and honk, I got out and walked up to the window and tapped on it. It rolled down and the three old biddies in church hats were sitting pressed together in the front seat of this Olds 88 passing a big doobie. Driver rolled down the window and a big cloud of smoke came out and I said, “Excuse me, I’m stuck behind you. Could you please pull forward?”

Saw B.B. again in front of a white crowd a year or so later and he was pretty lame. I thought, “I’m not seeing him again.” Maybe a year later, a friend had tickets and really wanted me to go with him. Ok, fine. I went, mostly to be with my boy Skirbs, who had never seen him and was really excited. It was at Heinz Hall. Symphonic hall in Pittsburgh – and B.B. rocked. He was totally different than the first time I had seen him. He played extended lines, he was surprising and passionate in his playing. Really cool.

That had to be 15 years ago, so he was at least 65, and he had a rebirth. It was shortly after he recorded “When Love Comes to Town” with U2 and I think that really had something to do with re-inspiring him.

Since then, I’ve seen him a bunch more times in different settings and while always a little different, an while he began mostly sitting down about 8 years ago, the playing has mostly gotten more and more inspired. I have seen him fiddle with distortion, play jazz, do cool comping behind his piano and guitarists. It is really astounding that he keeps pushing at his age and stage of the game. Go B.B.

Save the Big House The Sky is Crying
Scroll to top