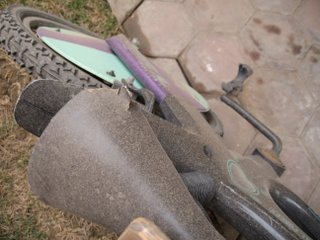 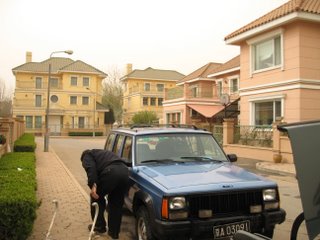 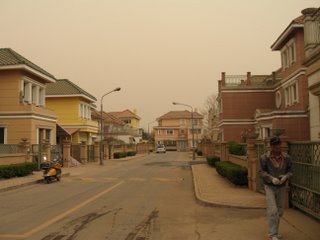 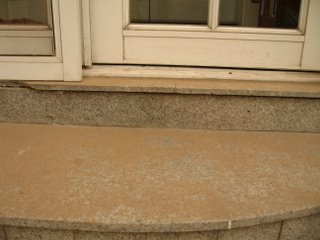 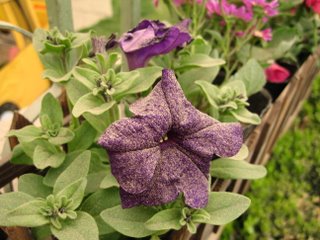 I came home yesterday afternoon and it was very nice to get here.

Last night, a sandstorm rolled in at some point. We didn’t hear it or see it, but when I got up and looked out the window, I saw the Yardleys car across the street was covered in brown dust or mud. I thought, “That wasn’t there last night.’

I went outside and was shocked by what I saw – everything was covered with a yellow/orange dust. And not a little bit of it. I rode the kids over to school, feeling grit on my teeth and face all the way. By the time I got back Mr. Dou had arrived and had already cleaned off our car, which sort of bummed me out, because I wanted to photograph it.

I took these pictures and I hope that they sort of capture the intensity of this yellow bizarre world, but I’m not sure they do. There is more sand everywhere than it appears here. It’s really disgusting.

The storm was largely over this morning though it has continued to drift around and you get a nasty taste in your mouth and nose being outside for just a few minutes. The kids did not leave school today for playground or anything. I spoke to a bunch of people who have lived here for a while and I guess this is about as bad as it gets.

What a strange and surprisingly fun trip I had. Most importantly, Dixie is recovering really well. I thought he would likely be in the hospital most of the week and I had no anticipation of leaving New York or doing much socializing. I spoke to a bunch of work people, at Guitar World, and the WSJ and a few other places and I planned to do one little meeting a day all week. I ended up cramming them all into Monday and Tuesday then heading to Pittsburgh, then back to NJ.

I stayed with Rodger and Andy two nights, squeezed in a margarita or two with ripper as awe l as a memorable breakfast at Barney Greengrass. I went out for a late night East Village Guinness or three with Per, and made it to the new old Le Mardi Gras in Shadyside, Pittsburgh with Evan. I also went camera shopping with George Lange and caught a great new Canon as well as the new IPOD Hi Fi system, which was a pain to carry but rocks hard. My brother and Emma came up and I saw them and Laura and Jon and family, and it was all really nice. And, as you know, I went to a Bucs game at PNC with Dixie.

In short, I saw a lot of my favorite people and did a lot of my favorite things with them. It was made all the more fun by the fact that it was so unexpected – I thought I’d be sitting by a hospital bed for most of the week. Also frustrating because for all the folks I saw there were many more of you I wished I could have seen.

The flights were ok. They are long, no two ways about it. But being solo after traveling so much with the kids, it feels like you’ve lost 100 pounds. When I checked my bag in at Beijing and was walking towards the gate last Saturday I had the engaging feeling that I had forgotten something and I kept looking over my shoulders. I just felt so light. It was nice to get around without them, just making decisions, doing what I want, not worrying about babysitting, rushing back, etc. But it also felt really a little unnerving to be on the other side of the world from my family. I know that many people do it all the time, but not me. it felt so good to get back and see everyone.

I feel at home in NJ and at home in Pittsburgh but best home of all was here, in this smelly, sandy city.