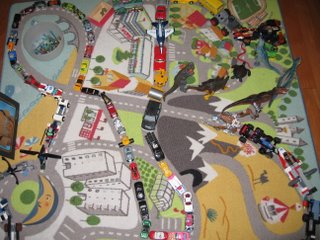 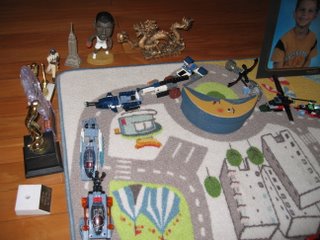 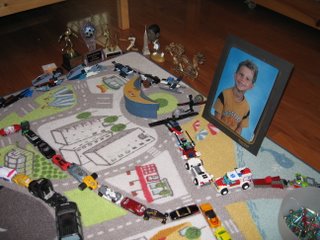 Jacob’s former nemesis and now good friend Caroline Madden and her family are coming for dinner tonight, along with the family of Edward Purcell, Jacob’s other very good friend. He has been very exctied about this for a few days.

He was up early this morning, which is not unusual. But he usually comes down and either slips in to play on my computer, or rouses one of us to help him get breakfast. Today I instead heard him rattling around his room and happily went back to sleep.

Later after he had come down, he disappeared into the toy room in front of our house. We were bugging him to come have breakfast – which never happens, he usually wakes up starving – he said, “One minute. Can you help me carry this stuff up to my room?” I said sure and went in to find him loading up a plastic storage container with cars, trucks, dinosaurs and Transformers. “What’s this stuff for?” I asked. “You’ll see,” he replied.

I carried it up to his room with him and saw what he had been doing all morning – making a meticulous setup of cars, trucks and other vehicles covering a large cityscape rug in their room. “I need to finish this setup with these guys,” he said. He told me his very specific plans for what was going where.

I told him to finish up and come down for breakfast because we had to go to school soon. He promised he’d be down soon. It took him about 10 minutes. Later, I went up to get socks or him and Eli and saw his completed work, which not only finished the setup but erected a sort of shrine to himself and all his favorite things around the perimeter, featuring every trophy he’s ever received (soccer, T Ball, baseball, both here and in Jersey), a stature of the Empire state building, a dragon he got for his birthday, a Tractor Traylor bobblehead and Josh Gibson statue (both of which I proudly found at Toys R Us when he was a baby and have been on his shelves ever since) and a couple of school pictures, inluding an 8×10 of his first Grade photo.

There was only one possible reason he would work so intently on such a thing and that is to show it off to Caroline tonight. I saw her mother this morning and went to confirm with her and she said, “Caroline ha been talking about going to Jacob’s house for days. I told her I had to confirm we were on and she said, ’Oh we’re on. Jacob told me all about it.’”

I’m looking forward to seeing him escort her up the room to see his handiwork.