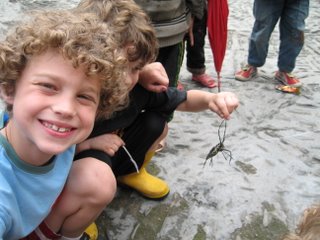 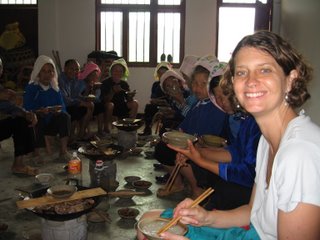 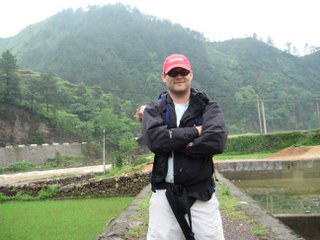 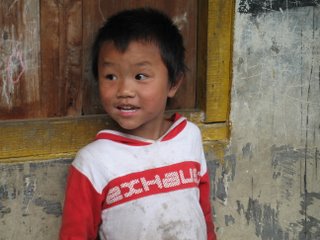 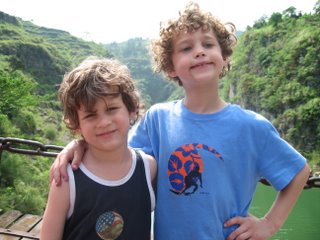 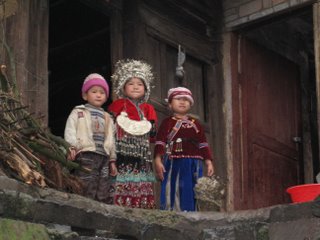 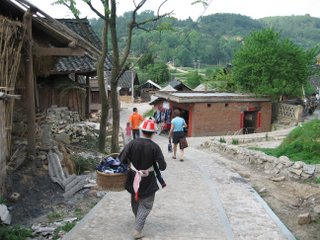 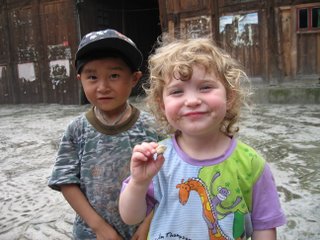 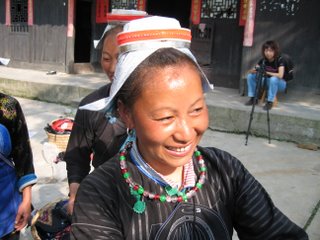 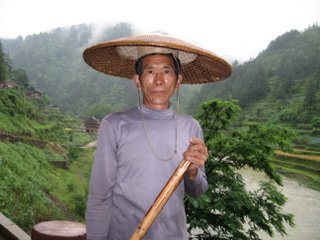 God, I have so many great pictures to share. I will try to post a bunch but will start with shots form the villages we visited. The area we were is an autonomous region for Miao minority people. They are the same as the Hmong in Laos, Vietnam and other places in SE Asia.

We toured a bunch of their villages, one that was pretty big and relatively wealthy and really catered to tourists (mostly Chinese) and several off the beaten path where there was no tourism.. just people living and being.

There were kids everywhere – minorities are not bound by the one-child policy and have two or three kids – and many of them had beautiful, expressive faces. After a while, I started filling my pockets wit lollipops and gum and giving them out to kids, who would invariably follow us around anyhow. Jacob and Eli really enjoyed handing them out and the kids and the elders were all happy with this.

The women wear really bright clothes, and have elaborate hair styles. Some of the kids were really dirty but quite handsome and everyone was friendly.

The one kid pictured here with Anna had a pet bug on a leash! I thought that was cool. You can see it a bit in the picture with Jacob and Eli holding up a string.

They all live in traditional houses, which are brick or stone on the bottom and then two floors above it that are wooden and distinctly styled. The animals (pigs, chickens, water buffalo) live on the first floor, the extended family above. Yes, it looks like a fine breeding ground for bird flu. No there haven’t been any reported cases in any of the villages.

The picture you see of becky sitting with all the Miao women was petty cool. We did a hike off the road through rice paddies and over little walls, through two villages. As we came out the end of the second one and approached a bridge over the river that would take us to our van and our trusty drier Mr. Li, I saw a little store and asked Duan, our guide, if we could get water there. He said yes. We walked in to get something to drink and some cookies of the kids, who did remarkably well on the almost-two-hour hike.

We got what we came for in the front but in a back room, all these older women were sitting down to lunch. “Cha Fan!” “Cha Fan!” (Eat, eat!) one woman said to me, grabbing me by the arm and dragging me over. She poured a big ladleful of congee – rice porridge – into a bowl and handed it to me with chopsticks. I had a few tastes. It tasted like glue. I nodded my head and smiled and said “hen hao!” (Very good!). I thought I could hand it back and leave, but she dragged over a little chair and presented it to me. All the woman smiled and pointed.

I sat down. Becky came over. I whispered to her, “You don’t want one of these. Take a little form me and tell them how good it is.” She did that. I fed her with great flourish. But it didn’t work. That only excited them. They pulled up a chair for Becky and handed her a bowl.

Then a woman brought over some salt and sprinkled it in for us. it didn’t taste bad with the salt. Then they started passing me little bowls of food, including some kind of meat that was really spicy. I took some and put it in the congee and mixed it around. Now it actually tasted pretty good, God help me. Duan took the kids to the car where they ate their cookie and waited with Mr. Li and we ate a bit.