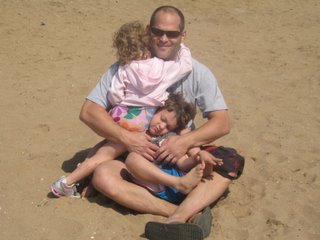 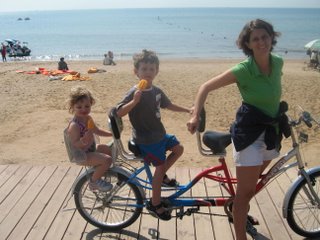 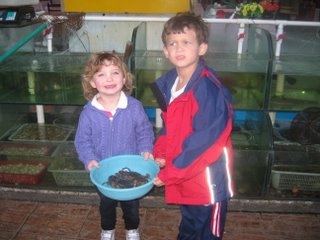 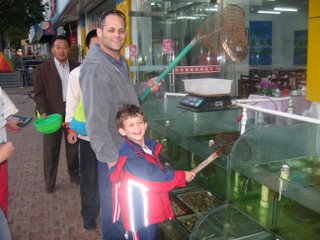 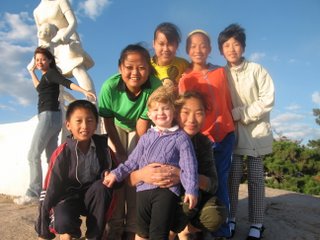 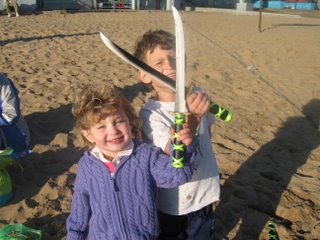 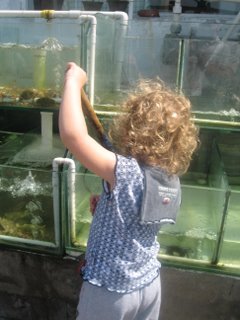 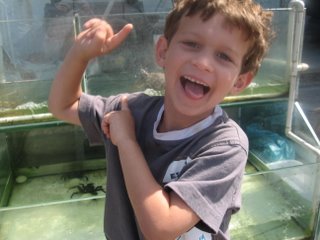 Well, we’ve been keeping to our pledge to get out and about more this year. We went away the least two weekends, for at least a day. Last weekend, we went out to the country home in a small village of our friends Eric and Titi. We had a great day and ended up taking a hike on a beautiful, not-too-refurbished section of the wall. Unfortunately, I forgot my camera and Eric’s had a dead battery so it will have to live on only in our minds’ eyes bu tit was a great and a perfect distance for the kids to be able to do it and feel good.

Two weeks ago, we decided to head to Beidahei, the closest beach, which is about three hours away, a straight shot down a nice highway. Jacob actually stayed back here with a friend. He was invited to a birthday party and really wanted to go and the mother invited him to spend the weekend. Both parents are teachers at the school – the mom is actually the librarian – so we felt comfortable with it even though we don’t know them well. We were taking him over and telling him all the things to do – “be polite, try the food, blah blah blah” and Eli said, “Try not to pee on the toilet seat, Jacob.” When I laughed, Eli was puzzled and said, “Really. That’s important.”

The drive out to Beidahe was by far the longest we’ve taken and it was fine. It’s a nice road. We had to pay tolls of about 120 RMB, which is about $15 and really a lot of money. It keeps people of it, I think. The only vehicles out there were huge, often overloaded trucks (see them everywhere) sometimes going really, really slowly, and German sedans usually with black windows (Audis, BMWs and Mercedes in equal measures) going really , really fast. I’m told that the Auydis and Benzes are gov’t officials and the Beemers are biz men. Some of the cars didn’t even have plate;, some had govt plates. Bediahe has a lot of big villas where officials spend their summer weekends.

The one thing we passed that kind of shook me up was a large blue truck filled with caged dogs. There was only place they could be headed and it was sad. They looked like really nice pooches, with kind eyes and it was hard to look at them or think about what fate awaited them.

We got into town and were surprised by how nice it was. The beach wasn’t exactly gorgeous but it was a beach and the water seemed to be pretty clean and quite alive. When tide was low, there were starfish, crabs, mussels, clams and other stuff, much of which we ate later at local restaurants. Eli and Anna took great joy in choosing and even catching their food out of tanks. I wa pretty impressed with Eli’s insistence on eating squid. He said it was because Jackson (his best bud in Maplewood likes it, so he wanted to try it.)

We caught about four of the slimy things and five minutes later they were on our plates, sautéed with green beans and in a soy sauce. They were delicious, really not too chewy. I think it’s nearly impossible to get fresh squid because, like shrimp, it is usually immediately thrown onto blocks of ice when caught.

We also had crabs and fish along with fried rice and dumplings. It was all really good. The next day, before leaving, we went to another restaurant and the kids again took great glee in catching their lunch, which this time included shrimp, flounder (which Eli called “stingray fish”) and more crabs. It was also good, though more simply prepared without as much good sauce other than the flounder. They also ripped us of, doubling the amount of shrimp we got, which they charged an arm and a leg for. But it was delicious – again, very rare to eat shrimp that was just alive – and the old lady out front loved watching Eli and Anna catch and release giant snails, clams, crabs and shrimp, giving us a peaceful interlude.

I was a bit horrified that Eli and then Anna, following his lead, really realy wanted to catch and eat a turtle. I refused, which made Becky happy. She was just glad to know that I actually do have a line I won’t cross when it comes to eating and it is drawn just in front of turtles. I actually would eat a turtle no problem but was sort of disturbed by Eli’s eagerness to do so, especially since he has one in his class and even noted that he thought it was the same kind. I thought that just kind of gross. But I was proud of him overall for the way he approached this seafood thing, and Anna for going along with it, though she didn’t actually all that much of it. Eli did. I think they also enjoyed not having Jacob around for a day. The sheriff was gone and Eli moved up in the hierarchy.

The other thing that was really notable about this trip was the abundance of Russians in the town. We got to our hotel, a large 4-star place that really was and it was filled with Russkis. Amazing. Big Russian looking Russians. The hotel was probably 80% Russian, 20% Chinese and us. There was absolutely no English spoken anywhere, but the hotel had Russian translators on hand. Few of the Russians spoke English either but I did find two who did a bit and they said they were all from Siberia and other places in eastern Russian and they had taken the train two days to get there, the closest beach to them.

Catching Up with Summer Photos: Beach Haven Who you callin’ a Jew bitch?
Scroll to top