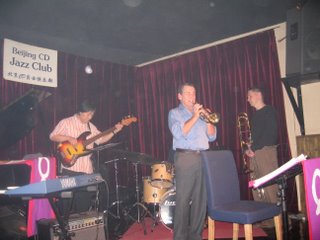 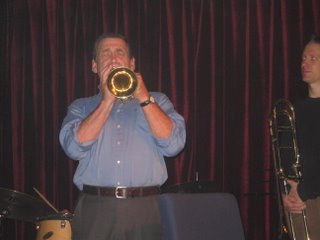 My friend Matt Roberts and his Ah-Q Jazz Orchestra play every Saturday night at the Beijing CD Jazz Cafe. Last Saturday, their special guest was “Pittsburgh Dixieland trumpet player Dixie Doc.” About six friends joined us at the front table of the packed club. It went well.

Dixie had to get used to standing instead of sitting and he went from being 15 years younger than his average bandmates to about 35 years older. I’m pretty sure he never played with an electric bassist either. Most of the other guys had never played this kind of music — they play fairly modern post bop jazz but they were all game.