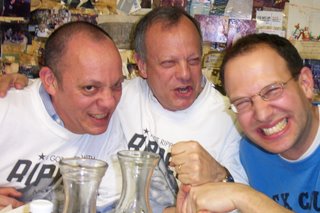 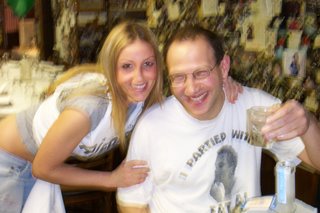 My man Rodger “Ripper” Citron sent me the following message with glee. On top is a picture very similar if not identical to the one mentioned below, which the Judge brought to class. Since one humiliation deserves another so I posted an additional shot with the waitress at Sammy’s. Skirboll had her all hot and bothered. These were from Rip’s bachelor party a few years back.

I thought Foul was autographed by da Judge until the end. Tremendous, all the way around. You’ll either get it or not. Can’t be explained.

The Hon. R. Benjamin Cohen – Uncle Ben to those in the extended family,
including me – made the pilgrimmage to Long Island today to visit Touro Law
Center and to lecture in my Law and Literature class. The mere fact that he
made the trip puts him in a select group: not even my wife, the Comb, has
made the journey to Huntington.

We rode out together on the train. I got dressed up – wore the khaki pants
and blue shirt from our wedding rehearsal dinner. The judge outdid me,
resplendent in a dark suit and brightly-colored tie. We had lunch with the
Dean and several fellow professors. Class did not begin until 3.30, so Ben
obseved another class and then we talked for a while.

The judge spoke for about a half hour then entertained questions from the
students. Ben was excellent – clear, thoughtful, and articulate. It always
is interesting to hear a legal professional speak to a law school class,
because he is so familiar with and really has thought through concerns that
we struggle over in class (for example, the role of the jury, or the
presence of bias in decisionmakers). At the end of class, Ben exercised his
right of rebuttal – essentially his right to the last word – by showing the
class his “I got Ripped with Ripper” t-shirt, a framed photo from that night
of me, him, and Uncle Tommy (you can guess who looks the craziest), and –
what will be a cherished present – an autographed copy of Foul! The Connie
Hawkins story. It was touching, though I have to confess I was a bit
mortified when the photo was passed around the class.

I’ll close with the Hawk’s inscription: “To Peace and Love, Connie Hawkins
#42.”

Don’t Look Down! God Shammgod and hoops journey to Shanxi
Scroll to top