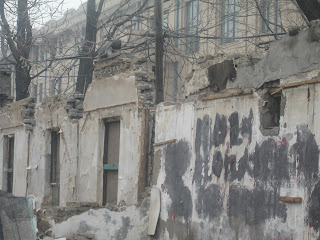 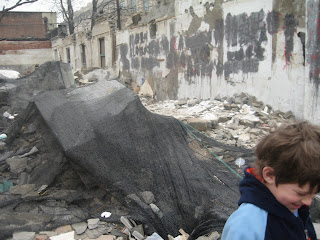 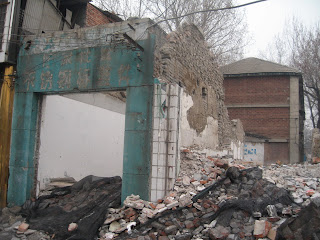 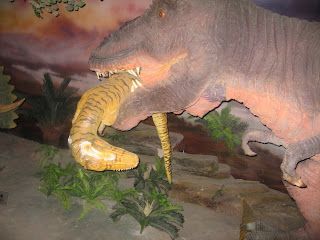 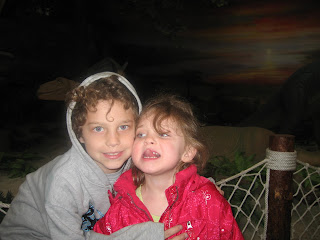 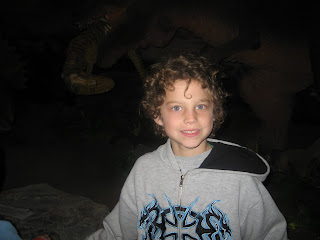 We finally made it to the Beijing Museum of Natural History yesterday. We had been told it was pretty good and it was.

Before I get to the museum, let me address the parking. If that seems odd, The museum is situated in South Beijing, just on the west flank of the Temple of Heaven, which is a really, really nice park and interesting historical site.

That part of town has been less torn-down and rebuilt. Not too many high rises and lots of low rise, buildings where real people work and live. Or it was like that. I haven’t been therein a bit, and I was just shocked driving around the North and then west flank of Temple of Heaven Park. There were blocks and blocks of hutongs being torn down, in various states of crumbling disrepair.

You get used to this in Beijing, but this really sort of stopped me in my tracks. Or it would have if I wouldn’t have been rear-ended by a trolley bus if I had actually stopped. We found the place and had to park down a bumpy rutted road with lots of garbage pile dup, a trolley bus stop across the way in this sort of narrow alley. and right up against some of the buildings being torn down. That’s what these pictures show. It was really striking.

There re still a few places open amidst this rubble, and no doubt folks still living in there. It’s sad. Anyhow, we walked on past all this and into the museum.

We haven’t really had a good outing somewhere new downtown as a family in a while and it was good to do so and or the kids to have a fun time surrounded by Chinese families, which is sadly too rare of an occurrence. Anna said to me today, “all the peoples at the museum only speaks Chinese” and she was really surprised. I think that’s really sad.

The museum felt pretty old and dated in parts but really pretty nice. They had a decent dinosaur exhibit.. not great in the real bones. But they had a “Jurassic Park” with moving dinosaurs eating each other… a little cheesy but the kids loved it. They also some pretty cool holographs displays of dinosaurs in their environments.

On the way out, we bought the kids ice creams, and as we headed for the car, we saw we saw “the Hall of Human Body.“ I had heard they had real human bodies in formaldehyde but someone told me they removed them under some pressure. So I didn’t look that hard, but there it was, in a little building outside the museum, right in front.

We walked in, past the “No photos please” sign, which I oddly obeyed, and there was a full human male hanging in glass jar. Along the wall were brains and some organs. Continuing on, they had more body parts, in cross section, including the male and female reproductive systems. Jacob said, “Ha ha! A penis! Why didn’t you tell me about this place?!”

They all loved it and were surprisingly not grossed out – even by the baby. Yes, baby, floating formaldehyde. In fact, Eli opened up his Mr. Banana ice cream and was chomping away as he looked at all this stuff in a small and dingy room.