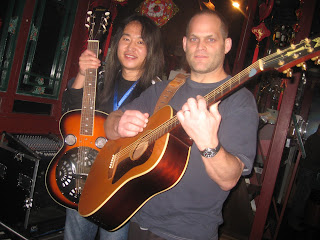 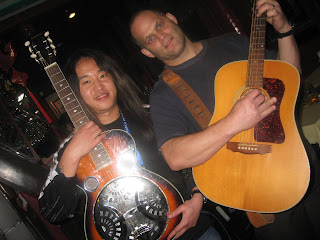 Here you can see the very first photos of the mighty Woodie Alan. Photos from our third and final rehearsal last night, at the Stone Boat in Ritan Park, a great little bar. we were there past midnight hammering some stuff out and enjoying the icy draft Tsingtao.

Unfortunately, saxman Dynamite Dave couldn’t make it. He called when I was on my way down. It’s hard to find good help these days. Here, just three days before our gig a key band member backs out just because of some so-called six-party talks. Says he got pulled in, can’t leave. Whatever happened to priorites? Luckily, Dave’s the least of our worries. Hopefully, he’ll be able to be there on Saturday but he is now officially pulled into a riptide.

Hmmm, cupcakes Sleepovers and such
Scroll to top