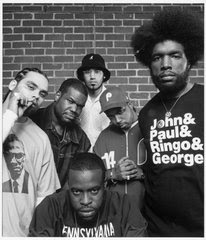 It was fun to be out and it’s always interesting to go to an event dominated by 20-somethings. There is a whole other community of expats that we don’t deal with or know much about and it’s easy to forget about them until you end up packed into a smoky club with 1,000 of them. And that was last night. There are lots of 25-year-old Caucasians around here. Right in front of us were a small pack of Icelandic young men singing along with every word.

I thought the Roots were ok, not great. I never thought I would be so happy just to see five black dudes of approximately my vintage from Philly. I would have much more enjoyed just hanging out and talking with them than listening to the music. I mean, the music was ok, but I really would have liked to just hang and talk. I probablycould have done so with a little effort and I sort of regret not having tried, but it has certainly been a hectic few days.

They came out and the singer was wearing a Yankees cap and that sort of offended me right off – why is a Philly guy wearing a Yankees hat? Anyhow, I won’t go into too many details because I’m sure most of my loyal blog readers have already stopped reading or are scratching their heads and asking, “who the hell are the Roots?”

Just a few things – they got a good groove going but the mix was so bass heavy, the vocals were completely lost in the soup. It woul d have been nice to hear some of the lyrics, which I sensed were pretty interesting. The band gets a lot of credit for being hip hop guys who actually play but I think the bar is pretty low in that world. There wasn’t really one guy I’d be intimidated to ask to jam with Woodie Alan. Everything was basically carried by the drums – ?est love is very good – and keyboards. The bass player seemed to have it going on and he had a great, great look. But he did some arm waving and the bassline kept on pumping. It had to be coming from the keyboards or a loop.

I’m sounding more negative than I actually felt, because I had a good time and really enjoyed being there, capping off a day of celebrations. I just didn’t think they were all that.

B. meanwhile was home alone with the kids and she hit such a wall at 8 pm after being up all night the night prior that she basically asked the kids to put her to bed then take care of themselves, which they thoughtfully did.