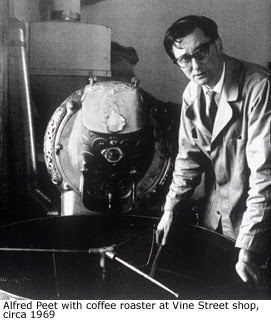 Been meaning to post something on this for a while.. I grabbed this from an insane website —www.coffeegeekcom. Reading sites like this is always a good reminder that no matter how nutty I feel a subject, I am a piker compared to the real nuts. But I really can’t tell you how much enjoyment I get from Peet’s coffee. I just had a cup of Java Old Estate.

It is with great sadness that I report the passing of a true legend in the world of specialty coffee – indeed, if any one person garners the title “Father of Specialty Coffee”, it would be this man. On Wednesday, August 29th, 2007, Alfred Peet passed away.

Alfred Peet started his coffee roastery in 1966, in Berkeley, California. The concept of “specialty coffee” was almost completely unknown in the US at the time (and the term itself hadn’t even been coined yet), what with all the major national brands moving to more and more generic coffee styles, and the brewing method of choice for most Americans being the percolator for its convenience and ease of use.

The Dutch-born Peet grew up in a family immersed in the business of coffee, and he emigrated to the United States in the 1950s where he continued the family trade, working in coffee for major national chains. As the 1950s and early 1960s progressed, Peet became more and more disenchanted with the state of “generic” low grade coffee used by most roasters at the time and the lowering of the quality of coffee for the home, so he made a move in the mid 1960s to go into business for himself. Memories of the better quality central American coffees his Dad used to source and roast back in Holland were still vivid in his mind, so he started sourcing his own quality coffees and helped to start a revolution – bringing back the words “quality” and even “culinary” to coffee. He, along with people like Erna Knutsen (the Mother of Specialty Coffee, still with us, and the originator of the term “specialty coffee”), fostered in a true renaissance time for coffee.

Peet’s influence is far and wide. George Howell, arguably the father of specialty coffee on the Eastern US side, discovered great coffee at Peet’s Berkeley shop. The founders of Starbucks fell in love with Peet’s coffee and roastery and got to know Alfred personally. Once they moved back to Seattle after attending UC Berkeley, they opened up their small roastery in Pike Place market, introducing specialty coffee to the Seattle area in 1971.

I asked George Howell about Peet’s early days roasting coffee and his own memories of it: “I remember the first Peet’s in Berkeley, back in 1968, when I saw people standing outside holding porcelain cups with long stems as there were no paper cups back then!” Howell said. “It seemed to be some kind of art gallery gathering and I parked my car and walked toward the action. And voilá, an alchemist’s dream: a wealth of exotic-shaped coffee machines and accessories in a refined dark space anchored by a long counter with a panoply of glassed-in panels of roasted coffee blends labelled with exotic names.”

“Alfred Peet was a born marketer; he was the first to effectively, elegantly and publicly celebrate coffee, for the benefit of a young curious public seeking new experiences. He caught our generation’s imagination and we have not looked back since.”

When asked what kind of influence Afred Peet had on Howell’s own drive toward bringing specialty coffee to the masses, he said “the Coffee Connection (Howell’s roastery and line of cafes in Boston in the 1970s, 80s, and early 90s) was my take and expansion on Alfred Peet’s original vision. He was the foundation stone.”

Speaking for myself, I count myself as being very, very fortunate to have met Alfred Peet on a few occasions. He was opinionated, cantankerous, and ornery, (he even admits all of these himself) and absolutely sharp as a tack, right through his 80s. He always had a monster palate and always maintained a deep love and passion for coffee. Many of us have been extremely lucky to have met and talked with the man, and for me personally, I feel very gratified that I had a chance to thank him in person for what he’s done for coffee.

Much of our love and joy for true culinary coffee today can trace its heritage back to Alfred Peet. If you’re sitting back today, enjoying a great cup of single origin press pot coffee, or pulling a delicious blend off your espresso machine, raise a cup to Alfred Peet. If it weren’t for him and his influence, chances are today your cup may be a cup of Nescafe or Maxwell House.