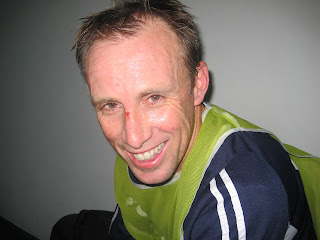 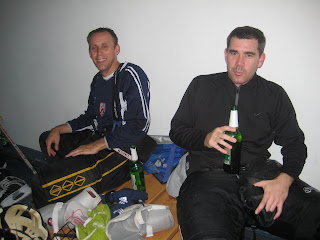 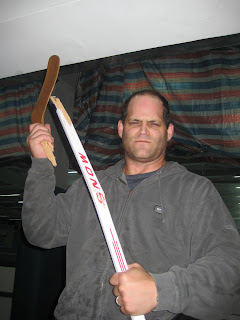 I’ve taken up a new sport — ice hockey. Our friends Vicki and Shawn — Canucks, of course — opened a rink nearby and started a beginner’s men’s league on Monday nights. 11 or 12 of us signed up, including my friend Fritz (pictured here with his nose injury — he was so proud.) We’ve played twice. We do 45 minutes of instruction

— which is good since most of us can’t stop and a couple of guys can barely skate — and then a 45-minute game.

The games are pretty hilarious. A couple guys are decent, a few are horrible — as usual, I am solidly ion the middle– but everyone gets really competitive and serious. The blood gets boiling and all of a sudden you’re going for the puck in the corner against your better judgment. Last week, I flew in there into a scrum, slammed into the wall and broke my stick, by wedging it against my groin, about two inches from serious problems.

My fellow players’ reaction? A big cheer and a huge leap of me in their estimation. Which says a lot about the kind of 40-something guy who would sign up to learn how to play hockey I guess. That moment also convinced us all to get cups. We’ve been using motley collections of borrowed gear, but our stuff has arrived from Hong Kong and tonight we’ll all be fully kitted out in our own gear.

I’ve Made It! I’m a finalist, but…
Scroll to top