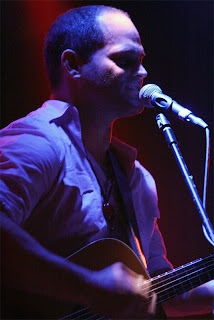 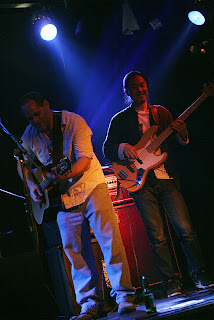 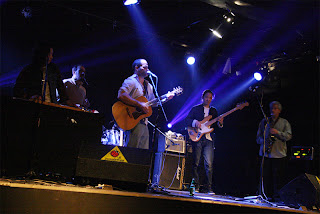 I set up a blog over on the Woodie Alan website, so I won’t be throwing every detail of our gigs up here – unless people are enjoying them. I’m not really sure about that, so let me know. I will share one more really good one.

I also put a new photos page up there. Woodie has a bunch of photographer friends and so we’ve gotten some really cool shots recently, including a bunch from that Yugong Yishan gig, sampled here.

We played another gig at the Jianghu Jiuba hutong bar last Saturday. It was their first anniversary party and the little place and its courtyard (now enclosed and heated) were packed. We played a great set. It really felt good. We were supposed to play from 6-8 and then Dave and I were supposed to join our wives at a dinner/birthday party for our friend and neighbor John Scales.

We played about 7-8:15, and our bassist Zhong Yang took off for his money gig and we were about to say good bye but the owners loved our music and begged us to stay and play one more set after the jazz band played “just 20 minutes.” Of course we couldn’t say no. He said the bass player from the jazz band would play with us.

They played close to an hour and were actually really good. While they were playing, I finally became fully immersed in China by gambling with a bunch of Chinese people (probably rather rudely while the band played behind us).

You see Chinese people playing cards and gambling all the time all over the place, usually with small crowds gathered around. I’ve stopped and watched many times and never can quite figure out the games. Woodie and his pals and cousin were getting a game going and I joined in and it was a lot of fun. It was a simple game and the starting pot was just 1 rmb (about 15 cents) but it could build pretty fast and there were some decent sized pots.. I won a couple, too.

Then the band finished and Woodie talked to the bassist who was a jazz snob and said he wouldn’t play with us. Word got around we were absent a bassist and some guy walked up and said to me, in English, “I am dong. I can play bass.” Well, welcome to the band Mr,. Dong.

We played an off the cuff thirty minute or so and were rocking pretty hard and then Woodie brought up a friend guitarist and we played a big singalong “Knockin on Heaven’s door.” And then I launched into “Sweet Home Alabama” and it was really fun. We don’t play the song but I had seen the guitarist play it and I knew he knew all the riffs and I just thought it would be a kick to sing “Sweet Home” to a room full of young Chinese and it was.

We were going to call it a night, but I started playing “Not Fade Away” and everyone grabbed it and ran. The guitarist had a slide on from “Sweet Home”: and he started wailing and we just caught a groove and took that jam to the moon and back. I couldn’t believe it. People were rushing in from the courtyard and the back room to hear better and see what was going on. I felt for that moment like we were the hot band playing in the hole in the wall little bar you’re always searching for and I frankly couldn’t believe it. It was an out-of-body experience.

I hated to see it come to an end. But it did. Woodie stayed to play harmonica with the next band, but Dave and I packed up as fast as we could – and arrived at the dinner after 11 pm. Everyone thought we were real cool guys, except our wives, but they were fine, too. Very supportive women, they are.

I unrelated music news, some of you find it even funnier that I am leading a Chanukah sing-along at Friday night services this week.