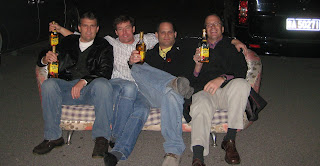 Did you hear the one about the two Southern guys who met and became friends in Beijing? One’s from Kentucky, the other is a native Tar Heel. One night they start arguing about who’s more redneck. It’s a little fuzzy now whether they were trying to out redneck or underredneck one another. Doesn’t really matter, but you have to assume they were going for the gusto.

One thing leads to another, they call each other the Beijing Hillbillies and the next thing you know one of them is turning 50 (hard to believe if you ever saw him play the rather unredneck sport of hockey) and the other is out searching for the ugliest, rattiest couch he can find in Beijing. You know, the kind of thing that a Kentucky hillbilly like his friend would have out on his front porch and the whole family would hang out on, night and day, winter, spring, summer and fall.

He finds it up the road, pays a good 13 bucks for it and then doubles it to get some poor Chinese guy to throw the thing on a back of a big tricycle and peddle it on down to hillbilly hollow. Then he proudly delivers it to his buddy and says something like, “happy birthday redneck.”

There’s a party and at about one am these two rednecks and a few of their foolish friends end up sitting on that dang thing right in the middle of the road, having a sip or two of Jose Cuervo. The famed Riviera security team pulls up in their little golf cart, but they’re mostly just confused.

Who can blame them?