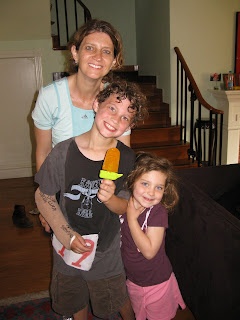 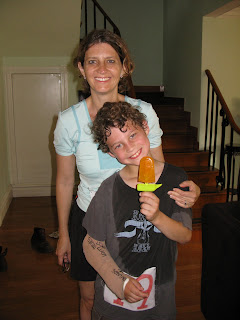 Sunday morning our compound hosted a 5k and 10k race and fun walk to raise money for the earthquake. They donated 500 rmb (about $70) for each person who registered — and there were a lot. They have somehow partnered with the Yale Club, because an American epidemiologist in Beijing is a member. She has found there to be a great need for wheelchairs and they will be purchased with the money.

Jacob and Becky ran the 5k and finished in the middle of the pack. I took up the rear with Anna and Eli, who bailed pretty quickly. we returned home to make waffles.

Even more impressive than Jacob running with that heavy cast was Becky doing it at 8 am the morning after we hosted a barn-burning, late, late going-away party for our dear friends Nathan and Kristi Belete, who are decamping for New Dehli. Woodie Alan played and we rocked this little bar downtown until the wee hours.

The other amazing thing about the race was the Chinese employees of the compound who ran 10K in work pants and shirts and loafers, and the ayis who ran the 5k in these little black slippers they often favor. That was quite moving and made me feel pretty lame.